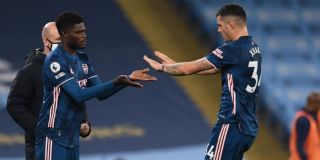 Granit Xhaka has hailed the signing of Thomas Partey as ‘very important’, claiming he brings ‘quality and mentality’ to the Arsenal team.

The Ghanaian midfielder joined the club on Deadline Day two weeks ago, following months and months of speculation, and made his debut at the weekend as a late substitute against Manchester City.

One player who is extremely happy with the new signing could well prove to be his main partner in crime in the middle Granit Xhaka.

“He will be the guy who is very, very important for me and as well for the team,” Xhaka told Arsenal Media.

“Everyone in the club can be happy about the player we took because he has great quality.

“He will bring a lot of good mentality, a good balance in our game because this is what we need a bit more: the mentality to win.

“He played at Atletico Madrid, a different type of football – maybe [the ability] to struggle a bit more against teams like City and Liverpool because they have these qualities as well – but, yeah – and he will bring a lot of good quality and mentality.”

Partey could find himself making his full debut in Thursday’s Europa League trip to Rapid Vienna, with him being overlooked at the weekend due to his limited time with the playing squad.

He certainly looks like a player who will improve our options tenfold in the centre, but we may have to give him time to settle in his new surroundings.

Will Partey bring another dimension to our game? Will Xhaka get the nod over Dani Ceballos and Mo Elneny for a regular role alongside the new signing?