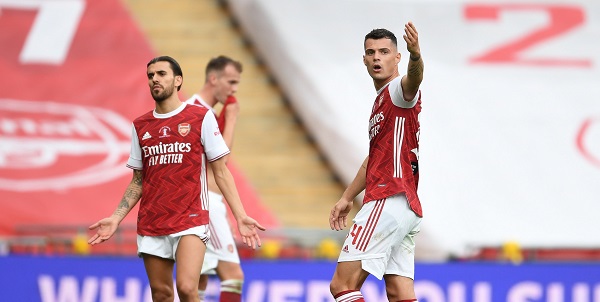 Paul Ince has slammed Granit Xhaka and Dani Ceballos for not doing enough in the absence of Thomas Partey after Arsenal was beaten 2-1 by Wolves on Sunday.

Thomas Partey has been missing in action since he got injured in Arsenal’s game against Aston Villa before the international break.

With the Gunners struggling for wins, Arteta will have been hopeful that his team would get back to winning ways in their game against Wolves last weekend.

He set up his team with Xhaka and Ceballos in midfield, but both players struggled to cope with Wolves and to protect their defence.

They also didn’t do much creatively, letting Wolves dictate the game from the middle.

Ince watched the game and slammed both players for being ineffective and being unable to recover well to shield the club’s defence, making the fact that Partey is missing obvious.

He put it across as a question to Ian Wright who agreed and says that it is a problem for Arsenal.

Ince told Premier League Productions via Express Sports: “When you look at the goals Arsenal concede and you talk about the midfield, it shows you how important Thomas Partey is because he’s got legs and that.

“But when you’ve got Ceballos and Xhaka in there, they don’t seem to be able to recover to get back into the right positions. Is that a problem?”

Wright replied: “I feel it is [a problem] and I feel that when they are that deep, they seem to have a real problem in getting closer.

So it’s the 4-2-3, they’re not getting close enough to the three so that they can pass the ball to the Willians and the Sakas, who can then release Aubameyang.

“It just seems like it’s very leggy, we haven’t got the legs to get up.

“That’s what I thought Joe Willock would have done today.

“He huffed and puffed a bit, I’d like to see him play a bit more, but unfortunately it didn’t quite happen for anyone at Arsenal today.”