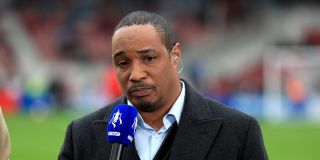 Paul Ince weighs in on the Pierre-Emerick Aubameyang debate

Manchester United legend Paul Ince tells Arsenal what they have to do about Pierre-Emerick Aubameyang.

Paul Ince has told Arsenal that they must keep hold of Pierre-Emerick Aubameyang at all cost despite his miss against Olympiacos.

Auba scored a stunning goal to put Arsenal into the aggregate lead in the game, but the visitors scored again and the former Borussia Dortmund man missed a sitter right at the death.

His goal against the Greeks makes it 20 goals in all competitions for him this season and he remains the club’s most reliable goal-getter.

He has just a season left on his current deal when this campaign ends and Arsenal has been struggling to get him to sign a new deal.

The attacker wants to win more trophies and a move to a team that has Champions League football could appeal to him, but Arsenal want him to stay and Ince claims that they have to pull out all the stops to keep him at the Emirates.

He said, as quoted in Football London: “When I look at their defence, I think he needs at least two transfer windows,” “But he [Mikel Arteta] needs to keep hold of Aubameyang, that’s a must.”

Arsenal has plans to make several signings when the next transfer window opens, but they would not want to lose their top scorer.

One can only imagine the situation Arsenal would be in now if it was not for Aubameyang’s goals and if they do lose him in the summer then next season will be a very testing one inded.