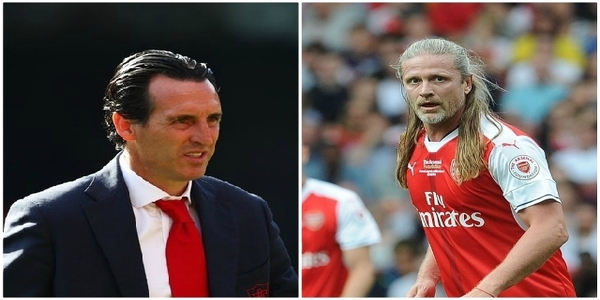 Arsenal legend Emmanuel Petit strongly believes that the north London club’s ‘DNA’ has been lost since Unai Emery took over from Arsene Wenger.

We struggled in Wenger’s last few seasons in charge, but at least we still stuck to the club’s core values and identities.

Since Unai Emery was appointed, it’s clear to see that the team’s playing style doesn’t fit in with the club’s historic ‘DNA’ – this is something that has Petit can’t forgive.

The free-flowing attacking football we played under Wenger seems to be a distant memory right now.

Of course no one expected this transitional phase to be easy, but how has Frank Lampard instilled a pleasing identity at Chelsea in a couple of months whilst Unai Emery has failed to do so in over a year at the helm?

We were sat comfortably in third place in the Premier League at this time last week, a shock defeat against Sheffield United and a dismal draw vs Palace has left us sitting in fifth.

Take a look at what Petit had to say about Arsenal’s current woes below:

“Do you know what makes me sad? It’s not the fact that Arsenal are struggling to be back in the Champions League, or fighting for the title, that’s been the case for a few years.”

“It’s that, what I feel now, is that when I look at Arsenal, I don’t see the DNA of the club any more. I don’t see the style of play from back in the day, the way we played for 20 years.”

“There’s no fluid passing, no movements, no one or two touch, I don’t see that style at all.”

“Since Emery arrived I don’t get pleasure from watching Arsenal any more. Some times, it’s even boring.”

“The Sheffield United game was such an ugly match. Then, against Palace, Arsenal were brilliant for ten minutes, then their opponents score, and suddenly we see all the weaknesses of this team mentally.”

“Come on. This is Arsenal. You should play football.”

“Every time we have the ball, the opponent should be scared, but they aren’t any more – they love playing against us. It’s very frustrating to see in the space of two years, but I don’t see the Arsenal style.”

Petit’s assessment of our current ability seems spot on, it’s become a real battle to get results from matches against respectably weaker sides.

In his tell-all column for Paddy Power, Petit also had his say on Granit Xhaka’s ‘unacceptable’ reaction to fans after being subbed off.

We look no closer to re-establishing ourselves as a top four side in the Premier League under Emery. We’re also hardly any better in big games since the Spaniard took the reins.

Something needs to change very quickly if we’re to mount a serious challenge for a Champions League spot against the likes of Chelsea and Leicester City.

Should we replace Emery in a bid to get our rebuild back on track?