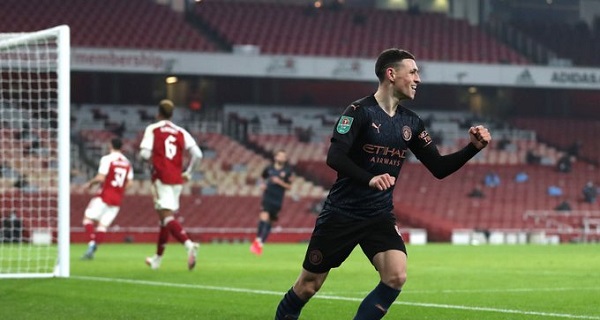 England and Man City’s Phil Foden has said that the Brighton and Hove Albion defender Ben White has impressed him the most in the England camp.

The 23-year-old, who is an Arsenal target, looks likely to end up at the Emirates Stadium next season. A fee of around £50m is being negotiated, with many inside the industry believe that it’s a matter of ‘when’ not ‘if’, White will join up with Mikel Arteta’s squad for next season.

The former Leeds man made it to the provisional squad of England for the ongoing European Championship on the back of two impressive seasons with Leeds United and Brighton.

An impressive Premier League campaign was luckily capped off with an entry to the main team, after Liverpool’s Trent Alexander Arnold was excluded through injury.

Foden claimed White has been “brilliant” in training

Phil Foden was asked who has surprised him the most with their talent in the England camp this summer. His answer was Ben White.

It hasn’t taken long for the young Englishman to win the hearts of teammates and staff in the England camp at St. George’s Park.

Asked which England player had surprised him most, Foden told ITV: “You know I really haven’t seen a lot of Ben and he came in and has been brilliant in training, so I’d say Ben White.”

His inclusion in the squad was majorly due to his versatility of playing in positions such as right-back, center-back and even as a defensive midfielder.

White is a complete package and that’s why Arsenal look determined to spend an enormous fee for the Englishman, who’s career trajectory is only headed in one direction.

With the acquisition of White, Arsenal can replace David Luiz’s ball-playing abilities to equal effect. The defender is also renowned for carrying the ball into opposition’s half, if given the space. He also boasts pacey legs which can prove invaluable.

Many believe that he’s a future England starter, who will be worth double or even triple of what the Gunners are willing to pay for him in a few years’ time. Judging by his growth in the past few years, people have every right to think of him as a future superstar.