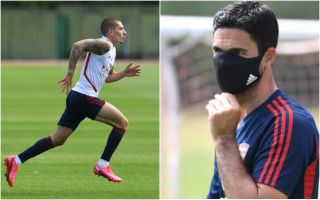 Arsenal are back in training after weeks of lockdown in the UK.

Photos have emerged of Arsenal back in training, and it’s rather amusing to see the range of new hairstyles after barbers have been shut during lockdown in the UK.

Some, such as Calum Chambers and Dani Ceballos, have clearly let their hair grow long in this time, while Hector Bellerin has gone down the route of just shaving it all off himself…

Pictures also show manager Mikel Arteta taking training with a face mask on, which we expect is going to be an increasingly common sight for some time.

The coronavirus crisis seems to be easing in most of Europe now, but it is of course vital to keep doing as much as possible to prevent the disease spreading in large numbers again.

Premier League football is expected to return next month, but it could look rather different from the game we know and love for some time.