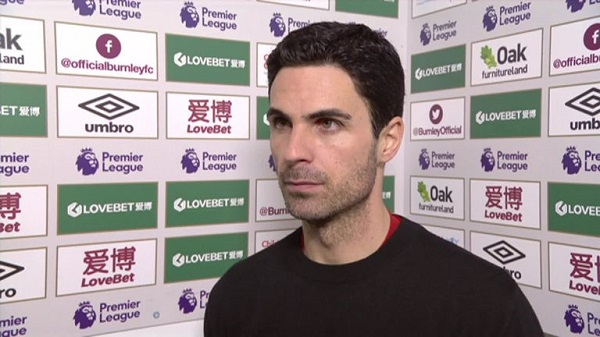 Poor start to second half could have cost Arsenal acknowledges Arteta

Mikel Arteta admits that poor start to second half could have cost Arsenal Burnley game.

Mikel Arteta has admitted that his team had a slow start to the second half and it was so bad that it could have cost them the game.

The Gunners welcomed back Pierre-Emerick Aubameyang and David Luiz to their starting XI as they visited Sean Dyche’s side.

They started the game well with Alexandre Lacazette and Aubameyang missing golden chances in the first half.

However, the Gunners started the second interval poorly and they almost paid for their sloppiness at the end of the day.

Jay Rodriguez appeared to have won it for Burnley, but his shot cannoned off the underside of the bar and was cleared off the line.

After the game, Arteta gave his customary post-match interview and he discussed some questions about the game.

He admitted that his team made a sloppy start to the second half and they were lucky not to have conceded.

“After 20-25 minutes, we started to concede a lot of unnecessary free kicks, throw ins, corner kicks and when that happens you can’t find any continuity in your play and that’s not the game we want to play” Arteta said after the game, per Arsenal.com.

“I was very disappointed with how we started the second half. The first 15-20 minutes we could not control any aspect of the game and we allowed a lot of crosses and second balls inside our box and some would say we were lucky not to concede a goal.

“The positive thing is the reaction in the last 20 minutes when we started to play again and we have courage to play and courage to take the opportunities that they allow because the space was there because they were committing a lot of people forward but we couldn’t finish the actions well enough to score.”

Arteta comments are accurate and in hindsight, a draw, was probably a good result in that it was not a loss, which it so easily could have been.

It was just a disappointing day with neither half being impressive.