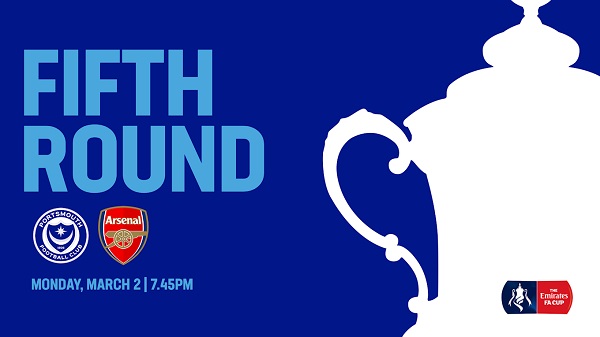 Just because Arsenal are FA Cup specialists and Portsmouth are currently down in League One, everyone thinks that today’s game should be just a formality for the Gunners, but right now there are other factors to be taken into consideration.

Firstly, Arsenal’s away form has been extremely woeful in this campaign with just 3 wins in our last 15 games on the road, while at Fortress Fratton Park, Portsmouth’s only home defeat this season was in a League Cup game back in September. The Pompey captain Tom Naylor thinks that the home fans could make a big difference in this cup tie. He told the Portsmouth FC website: “It’s going to be tough – there’s no doubt about that – and we just have to make sure we give it our all on the night.

“Our ground is a fortress and the atmosphere is crazy. I’m sure it’s something that our opponents will have to adapt to.

“Who knows what can happen – our form at Fratton Park is brilliant – but we just have to enjoy the occasion.

“I watched Arsenal the other night and the front four were absolutely frightening, while they have a lot of experience.

“You don’t know what sort of side they’re going to put out, but even their back-up players are internationals.

“We take every game as it comes and the league is our priority, while these cup ties are an added bonus.

“We’re into the fifth round to play Arsenal and we’re also going to Wembley for a final – just as we did last season.

“It’s massive for this club and it would be fantastic if we could get through to the quarter-finals of the FA Cup.”

I must admit that until today I didn’t consider Portsmouth as much of a threat, but when you look at the bare bones of the form, they could have a possible giant-killing in them. Let’s hope they go easy on us!