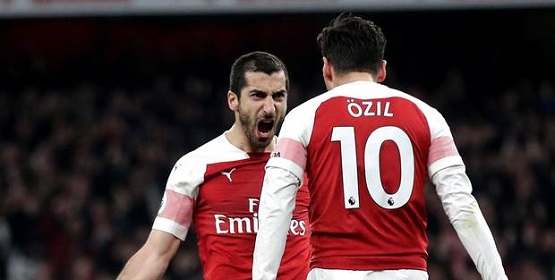 I am struggling to understand why it is that everyone seems to believe that we cannot possibly sell Mesut Ozil or Henrikh Mkhitaryan due to their high wages. I do completely understand that other clubs would be reluctant to take on either of their salary’s due to their current form and age but there are ways to offload them.

Raul Sanllehi and co made it very clear that we would not be letting players run down their contract beyond two years (with the exception of the player being old and retaining no real value). I also think it is clear that Arsenal does not wish to extend their contracts which must surely mean a sale?

So, why not speak with both players, inform them again of the new regime and then further explain that they are not in the manager’s plans for the future and that they think it best for them to move onto a new club. Offer them out at a reasonable transfer value to other clubs in Europe and let them pick their destination. I still think with Ozil’s name and brand that he could pull in between £100 – £150 thousand a week in wages. Arsenal then just offer him a settlement fee of a large sum to supplement his loss in wages.

Example: Sell Mesut Ozil for £25 million, give him a £15 million payout and bank the £10 million. This way we still get a small fee to put towards buying a replacement and also save on paying him £38 million over the next two years, at the end of which he will leave for free anyway!

Surely it is in Arsenal’s best interest to cash in now, take an initial hit and be done with this rather than keep a sulky luxury player that the manager doesn’t want to play, pay him £38 million and then wave goodbye to him for free at the end.

This would also help with rebalancing the wage bill.

I also believe this would be in Ozil’s best interest because at 30 years of age he hasn’t got many good years left and would he want to spend the next two years on the bench? I would hope not. If he leaves now he could also probably secure that last big 4/5 year contract whereas that would be much harder in two years time.

I see this as a win-win for all involved as Ozil will get to play somewhere in the first team, he’ll get a longer contract, he’ll still be getting decent wages and on top of that, he gets a £15 million bonus.

It will also appease the fans because if they let Ozil, Mkhitaryan and co run down their contracts it completely contradicts Arsenal’s ‘new transfer policy’ and leave the fans never believing a word they say again.

Do you agree with this or do you see any issues with this suggestion?