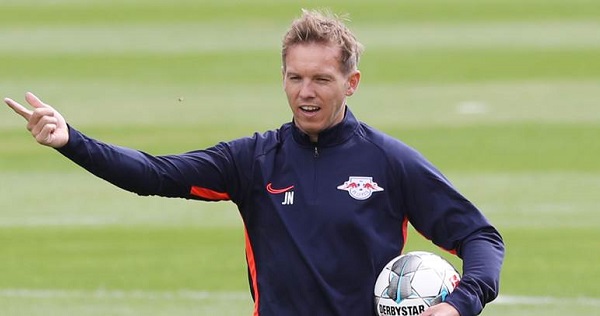 Julian Nagelsmann has been hyped perhaps more than any other German coach since he became a football manager before he clocked 30. He seems to be living up to that hype and in this article, we look at why he should be considered as a candidate for the Arsenal job.

Julian Nagelsmann did a great job at Hoffenheim as he led the small club into the Champions League group stages last season. He has since moved to RB Leipzig and is building another team that is challenging for the German league title.

Nagelsmann is the latest German manager to follow in the line of Jurgen Klopp and he could just become Arsenal’s answers to his compatriot.

His current 64 per cent winning record as manager of Leipzig is one of the best around and he can make Arsenal more competitive again.

Nagelsmann is a great man-manager and seems to know how to bring the best out of his players. He did that with Andrej Kramaric who had flopped at Leicester City.

The fact he is German may help with the likes of Mustafi and Ozil.

It could be argued that the 32-year-old is overhyped, he has been a manager at the top level for three years now but has no trophy to his name.

His lack of experience outside of Germany means he would represent a significant risk for Arsenal.

His age may also affect his relationship with some of the older players in the side, David Luiz as an example.

His almost non-existent playing career could make it difficult for him to gain respect from some of the huge egos in the Arsenal team.

All this considered Nagelsmann would, without doubt, be a huge risk that could either succeed or fail disastrously. The last thing Arsenal needs right now is to be taking a risk with their next managerial appointment.

This is the 21st and final in a series of articles that I will be doing and all words are my own perception and opinion.