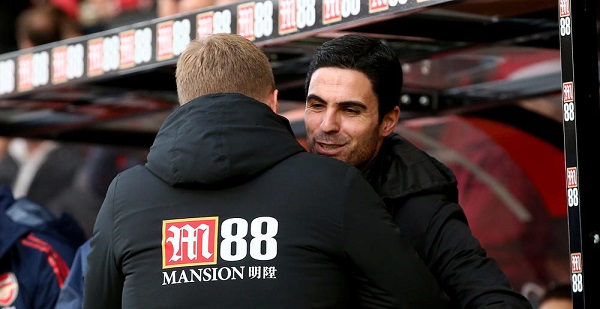 Mikel Arteta is expected to put out a strong team against Bournemouth.

Mikel Arteta has said that he will take the FA Cup seriously and for that reason alone I do expect him to stick out a strong team against Bournemouth this evening.

Additionally, there is a good six days before Arsenal’s next game and so it is not as if he needs to rest any players.

Pierre-Emerick Aubameyang and David Luiz are both out due to suspensions and there is, of course, that lengthy injury list.

One change I do see happening is that Martinez will replace Leno in goal. That seems to be the done thing these days with goalies and cup competitions.

I do not think a mystic is required to say that Saka will continue at left-back, there is no other option really. The right side is a little trickier, will Arteta plump for Maitland-Niles or give Bellerin more game time? I reckon he will go with Maitland-Niles for this one.

The central defence will see wholesale changes in my opinion with Sokratis in place of Mustafi and Holding replacing the suspended Luiz. The only way I see Mustafi retaining his position is if Sokratis is still not fully recovered from his recent illness.

Midfield is a minefield to predict and if Arsenal was at home against lower league opposition then I would not be surprised if the likes of Guendouzi or Willock was drafted in but away against a Premier League team is a different ball game.

Lucas Torreira and Granit Xhaka should continue their partnership at the heart of the midfield. The risk of a loss or a replay is too great and I am doubtful that Arteta will take too many chances with the heart of the team.

Could this be the game we see Ceballos return? Possibly, I mean would Arteta go with Ozil away from home on a winter night against a team like Bournemouth? I am not so sure. However, there does seem to be an issue with the Spaniard and for that reason alone I suspect Ozil will start.

The front three basically pick themselves. Will Martinelli be dropped to the bench? I don’t think so. Lacazette has to start really, his confidence would take a further hit and he really does need a goal desperately. That leaves just Pepe and again, I just cannot see him being dropped at this stage.

Now, Arteta could bring in a whole host of alternatives but if he really is taking this competition seriously then I would be surprised if there were too many changes to the following predicted line up.