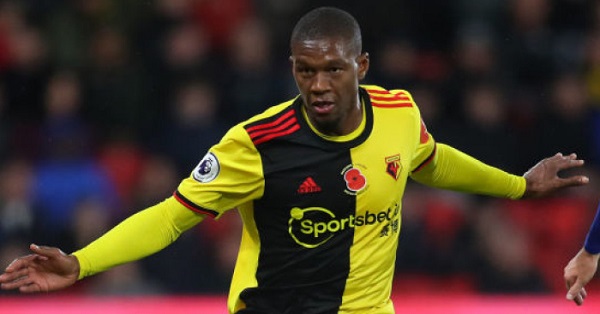 Arsenal and Manchester United battling it out for the same target.

Arsenal and Manchester United have both struggled at the back this season. This comes despite the Gunners signing David Luiz and the Red Devils signing Harry Maguire for £80 Million.

They have both seen their teams struggle to shut out opponents and it is not a surprise that they are on a lookout for defenders in this transfer window.

Le10 Sport claims that both Premier League sides have an interest in signing Watford’s Christian Kabasele.

The Belgian has been a member of this struggling Watford side but he has been a consistent part of it.

Nigel Pearson is helping them return to form, and Kabasele has been a major player in their resurgence.

His performances for the Hornets hasn’t gone unnoticed and Arsenal and Manchester United are looking to take him away from Vicarage Road.

The defender is already 29 years old and hardly looks like a player that would be valuable for resale, so it appears both sides want him to come and do a short term job.

Mikel Arteta is keen to sign a defender this month after losing Calum Chambers to a season-ending injury.

Another long term injury to any of his first-choice defenders could undo all the good works he has started with the squad.

Whether Kabasele is the solution to the issues in the Arsenal defence, I do not know but the little I have seen of him I have been impressed with.

Put it this way, Arsenal could do a lot worse.