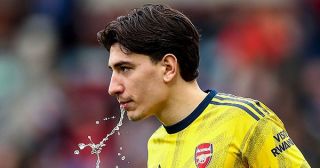 The Premier League wants players to stop spitting in one of the changes that have to be enforced due to the coronavirus pandemic, but it doesn’t look like it would be easy to achieve.

Premier League teams have returned to training in preparation for the restart of the campaign.

They are currently in phase two of Project Restart and the Premier League has been watching every team to ensure that they keep to the guidelines of the several phases.

Their inspectors have been watching every team as they train and while there isn’t much concern about teams breaking the rules so far, spitting has been a problem, reports the Mirror.

One of the rules as teams return to training is for players to stop spitting, but the Mirror claims that has been almost impossible for the players to abide by.

The report claims that clubs have been told that their players have to stop spitting but it has been tough for the players to keep to that because spitting is something that they have become accustomed to doing as second nature.

As the teams get set to start playing games again, it is claimed that players would also be banned from swapping shirts and sharing water bottles.