Preview: Will Arsenal’s next 5 League games define our season?

Arsenal’s next five League games can define their season

This statement has almost been overused by news websites on numerous occasions. But using this statement in the present climate seems fitting.

Arsenal travel to Burnley next weekend, and that game is quickly followed by two games against Olympiakos, with the Spurs game being sandwiched between the two ties. After that, they come up against their London rivals in Tottenham and West Ham.

The North-London outfit finally conclude their run of next five games against current league champions Liverpool.

Surprisingly, West Ham and Liverpool are scraping for the last Champions League spot this season.

Nobody would have thought that the usual relegation contenders West Ham and current league champions Liverpool would be fighting for the “last spot” of the Europe’s elite competition. But here we are in the strangest of seasons since the inception of the league in 1992.

Ask any Arsenal fan, whether they would have been happy by being just six points behind Jurgen Klopp’s men in the EPL table after 26 games, and the Arsenal faithful would have certainly nodded their head.

But the picture has somewhat played with the involved parties. Liverpool have endured a torrid season, as their title defense has been ripped to pieces in a matter of few months. Whereas the Gunners, six points behind the Reds, sit at tenth. 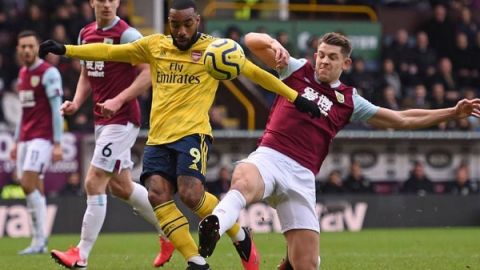 Starting against Burnley, the Gunners must see the game at Turf Moor as a must win. Three points against Sean Dyche’s men would be huge in their push for European football next season. If Arsenal end up losing, Mikel Arteta’s men will have a greater chance of ending gameweek 27 in the bottom half. They might have to fight a losing battle for the remainder of the campaign.

Arsenal just can’t afford to rue as many chances as they did against Benfica in the first leg of the round of 32 clash. Although the Portuguese side barely created a half-decent chance, they saw themselves leading 3-2 on aggregate with 25 minutes to go. Even though Mikel Arteta avoided a massive scare, Arsenal must learn from their mistakes.

The Greek side, who are 14 points clear at the top of the Greek Super League, boast better individual players in their ranks. They have better tools who can punish the North-London side to great effect. Arsenal fans would definitely be dreading a Sokratis’ winner in the last minute at the Emirates! You never know what you will get when you support Arsenal Football Club.

But a good result away from home can set them up perfectly for the return leg at home. They avoided some great teams like Spurs, Man United, Ajax and AC Milan in the round of 16. So, Arsenal should be expected to go ahead.

The North-London derby is sandwiched between both sides’ Europa League matches. Jose Mourinho would be relishing to face Arsenal, a team that he has defeated 12 times in 22 encounters, losing just two.

This is a match what the football fans like to say a “six pointer.” Whoever wins, can possibly be the one more deserving of European football next season. Bragging rights and Champions League football will be on the line for this one.

David Moyes’ West Ham United have gatecrashed the Champions League places in the weirdest of seasons. They sit at fourth position, just five points behind second placed Manchester United and a point ahead Chelsea in fifth. Like Arsenal, The Hammers have a tough run of fixtures with matches against Leeds United, Arsenal, Wolves, Leicester, Chelsea and Everton. If Arsenal want themselves to be seriously considered for European football, matches of such importance should be termed as “must win.”

The Champions defense of the Premier League title has, no doubt, gone horribly wrong. In their past five matches, the Merseyside club has won just one match. This might be a perfect time to play The Reds, given that they are nowhere close to their own level of the past two seasons. If Arsenal manage anything other than losing, they might become the dark horses for the qualification for Champions League.

Can Arsenal get to this point still with hope in our hearts?