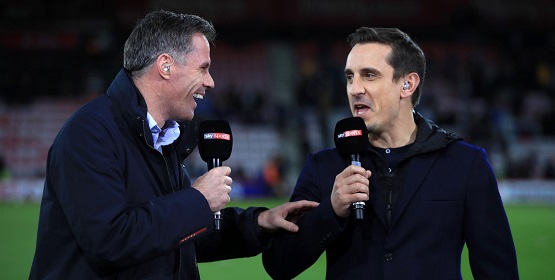 Gary Neville has bizarrely suggested that they complete the Premier League season outside of England in a place where the risk of coronavirus is lower.

The Premier League has been suspended since the middle of March and there have been talks of restarting again next month.

However, the early indications are that there could be setbacks as the coronavirus continues to spread, and the logistics required to get the season started are threatening to force the Premier League to abandoned the season.

However, clubs are committed to finishing this campaign as they look to avoid missing out on money from TV rights that may force some teams into bankruptcy.

Neville has been one of the most opinionated pundits on the issue of restarting the campaign and in his latest comments, he suggested that the campaign be finished outside of England entirely, but he didn’t mention where.

‘If the Premier League is serious about delivering the matches that remain in the most-safe environment they would move it to somewhere that is three or four hours away that is safe from coronavirus and somewhere that has proven it can handle it,’ said Neville as quoted by the Mail.

‘There are some hotspots in Europe that could handle the PL finishing. I’m not sure they can deliver what they want to do in this country with the amount of logistical issues.

‘My view on this matter a few weeks ago was if the PL wanted to deliver a message to the nation, as part of a package, they could have bought £4m worth of tests to deliver the PL and then give £20m to the NHS to buy tests and surround it in a package that was acceptable to the nation. I think it will be difficult.’

Arsenal became the first Premier League team to return to training in anticipation of a restart and the latest news is that there remains a determination to see the season completed.