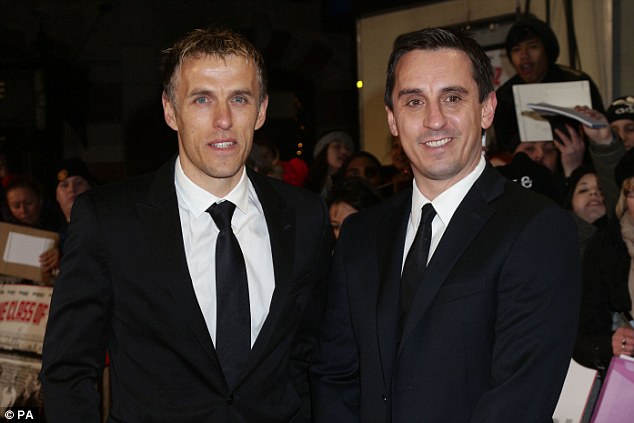 Pundits in the spotlight – The Arsenal-hating Neville Brothers

PUNDITS AND PUNDITRY – AN ART FORM OR EX MANAGERS/PLAYERS WHO ARE PAID A FORTUNE TO GIVE PERSONAL OPINIONS?

The dictionary’s definition of a pundit:

Now Arsenal have been a focus of these self-appointed experts on many occasions and with varying degrees of opinions.

They tend to be ex-professional players, some very successful and others not quite so, ex-managers, ex-player/managers and even ex-commentators who now see themselves as pundits.

Let’s have a look at the second and third of these experts/pundits who have done both sides of the coin and discuss their personal merits and in no particular order:

In this article, I want to look at the Neville brothers, their time as players, managers/coaches and pundits, especially in relation to The Arsenal:

England Full International 1995/2007 with 85 caps – holds the record for the most capped right back. Known as an “old fashioned” defender, his playing career was one of tremendous success at the highest level.

There is no question that he had the knowledge to be described as a pundit regarding football in the art of defending.

He writes a weekly column for The Sunday Times of Malta, where the oldest recognised MU Supporters club is based. He then joined the Daily Telegraph in 2014, as a sports columnist.

My personal problem with his punditry, is when we look at his managerial record and how he advises premier league managers/coaches what they should be doing.

On the 14th May 2012, he joined the England camp, on a four-year contract as part of the coaching team and was involved in both the 2012 and 2016 euros and the 2014 World Cup, where England were eliminated in the group stages.

They finished bottom of their group, drawing just one game, consisting of Costa Rica, Uruguay and Italy.
He joined Valencia in December 2015 and was sacked after only four months in the job. His record at the Spanish club in La Liga was: Played 16 – Won 3 – not one clean sheet recorded.

He also oversaw the elimination from the Europa league, being sent off in the process for protesting about a goal awarded. When he left the club, they were only six points away from the relegation zone (shades of UE!!!!)

Now, if that kind of managerial record gives him the title of a pundit, then Unai Emery should be his boss. But there we sit, listening to him telling us all what premier league managers are doing wrong.
With his obvious history of conflict regarding our club, he seems intent on belittling everything we do and never seems to question dubious refereeing decisions.

Again though, when we look at his managerial career, the same questions arise. His only senior managerial record is listed as Manager of the England Women’s team from 17th January 2018 to July 2021. He oversaw 35 games, of which 19 were wins, 5 drawn and 11 lost.

He was also assistant manager to his brother at Valencia and followed his brother out of the club, following the miserable results detailed above.

So, I ask, once again, what makes Phil Neville an expert in the management side of punditry? What evidence is there that he should be able to sit in his chair, telling anyone who wants to listen what managers/coaches are doing wrong?

I also listen on in amazement, when either of the Nevilles condemn players who are caught out on TV using bad tackles that might end a players career.

I am sure every Gooner will remember these two brothers doing a hatchet job on Jose Antonio Reyes, supported in no small way by the referee, as they ended our Invincible run?

There is no doubt in my mind, that they were sent out to injure Jose as a minimum result of their assault on our player. When questioned about it, Gary maintains that it was all part of the rough and tumble that happened when the two clubs met, while Phil was reported as saying: “They [Arsenal] had a young Spanish winger called Juan(sic) Antonio Reyes, and we literally kicked him off the park. Every time he got the ball, Gary smashed him. Next time he got the ball, I smashed him. I remember looking at him and thinking, ‘What am I doing in English football?'”

We should also remember that Phil was warned over his remarks on a MOTD show, when he said that he would take a player out of the game if he had seen them perform a pass without looking – these comment were made after he had watched Tomas Rosicky pull off this feat, in a 3-2 FA cup win against BHA.

The full quote? “If that was a training session and somebody did that, I’d probably look to two-foot him or take him out of the game. If somebody did that in training to me, winding me up, I would be straight in there, I’d smash them.”…it seems to me that is exactly what you and your brother tried to do to Jose and it’s no coincidence he went back to Spain, following this planned attack on a fellow professional.
RIP Jose.

Now are these the kind of “pundits” that should be telling everyone how to play the game, how to manage a successful premier league club, or comment on how a player needs to be judged within the rules of the game?

As it is all about personal opinions, I will just give you my view – never in a month of Sundays…