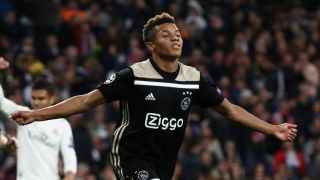 Arsenal has been linked with a move for Ajax attacker, David Neres as they continue to bolster their squad.

The Gunners have been busy in the last few transfer windows adding players who will help them rebuild their club.

They have added the likes of Ben White, Martin Odegaard and Albert Sambi Lokonga to their squad recently.

After their poor start to the season, they have now won consecutive league matches 1-0 each.

Those matches have seen them show significant signs of improvement, but if they are serious about becoming a top-four club, they need to add new players.

Todofichajes says Arsenal recognise that and they are now interested in a move for Neres.

The Brazilian has a contract with Ajax until 2023, but he doesn’t look likely to extend it.

He has lost his place in their first team recently and is now set to be sold by the Dutch giants.

The 24-year-old has been one of Europe’s trickiest wingers since he has been in the Netherlands and he would join Arsenal as a fine attacking option.

The Dutchmen currently value him at €27M, but the report claims that Arsenal can sign him for less than that figure.