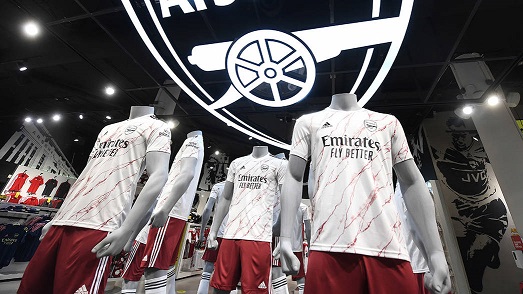 Respect to Adidas for Arsenal’s new away kit

Adidas did such a great job with kits last season, their ideas for 2020/21 were always going to divide opinion.

I often don’t like to buy the home version as 60-pound plus is a lot to pay for a red shirt where the only change every year is small detail.

Of course, taste is subjective, but I appreciate originality. The more a designer thinks outside the box the bigger gamble they take. So, I can imagine white with a red marble scratch effect will be like marmite to many gooners? Yet you have to respect the brand for trying something different.

There are some fans who like us to stick to our usual colours of red/white at home and yellow away. Those people certainly wouldn’t like us wearing the same colours as Spurs. This forced the manufacturer to release a statement insisting it’s not that kind of white. In fact, with a bit of context, this design is more traditional then you might think. It’s essentially a tribute to Highbury’s famous Marble Halls.

Many have viewed the Halls as a reflection to how Herbert Chapman revolutionised the club, hence that’s where his statue remains. Indeed, our ex manager had an image of how the East End should look. It was the start of the ‘Arsenal Way’; the club always wanting to do things the right way, with some style and class
Even after our Highbury stadium was redeveloped into apartments that was one former feature that was retained.

Of course, the blood/scratch logo sets up obvious puns for the media, especially if ever suffer a heavy beating. Yet Adidas could have just taken our money and played it safe. They have taken time to get to know our history, first a flash back to the Bruised Banana and now the Marble Halls. Even if you don’t rate their latest attempt you have to respect them for that.

I liked for example when away kits included blue, gold, purple, etc. I like that it means something while being original…

How Do You Rate Our Away Kit?