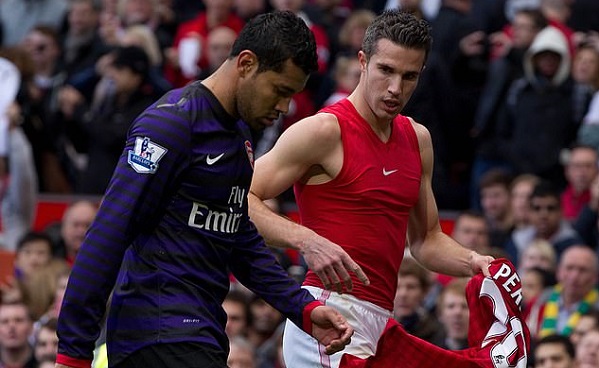 Robin van Persie has recalled his shirt swapping incident with Andre Santos and he admitted that he probably should have thought about it more before accepting the Brazilian’s request.

Van Persie swapped Arsenal for Manchester United in the summer of 2012, the Dutchman then faced the Gunners a few games into the new season.

He scored against Arsenal that day and Andre Santos, who played as a left-back in that game, wasn’t having a good day.

During the half time break, the Brazilian swapped shirts with van Persie much to the dismay of the club’s fans and they did let him know about that afterwards.

That incident appeared to spell the end of Santos’ time at the Emirates as the Brazilian was proven not to be an inspiring signing.

Van Persie has recalled the incident and he admitted that he probably should have thought about it more before accepting the offer to swap shirts with the Brazilian.

Van Persie told BT Sport via Mail Sports: ‘You have to think about the consequences. You know, if I look back at that moment with Santos I think I should have done better there.

‘Yeah, poor guy. It was all negative for him because (people thought) why are you swapping shirts at half time?

‘I do get that feeling that people might think that way. But Andre Santos was a friend of mine. We went for dinner, I was going to his house while I was playing at Arsenal.

‘I think it was my first game back (against Arsenal) and at half time he asked me, but I should have thought about it a bit better and waited 20 metres then swapped inside the tunnel. It would have saved him a lot of hassle.’

‘So difficult to name one’ Ex-Gunner picks two Arsenal teammates as best players he has played with
28 December 2021, 16:30