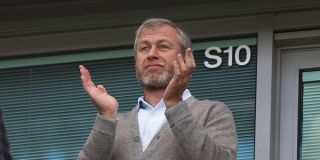 Roman Abramovich could have bought Arsenal instead of Chelsea

If things had turned out differently for Roman Abramovich, Arsenal would have won the Champions League and perhaps a few more Premier League titles as well.

This is because the Chelsea owner enquired about buying Arsenal initially before settling for Chelsea.

A new book claims that Abramovich had asked a few Swiss bankers to scout for a Premier League team that he should buy, and they reportedly misinformed him that Arsenal wasn’t on the market.

The Russian then settled for Chelsea who he bought for £140 million and he has helped the Blues win a Champions League and several Premier League titles among other trophies.

Arsenal has continued to wait for their first league title in over a decade and European silverware continues to elude their trophy cabinet.

According to The Sun, the book further claims that if Abramovich had tried to buy Arsenal he would have succeeded.

The report also adds that the Russian spent a good part of his time at Chelsea trying to lure Thierry Henry over to his side of London.

Arsenal is now struggling to fund major transfers while Chelsea has been buying some of the world’s most expensive players under the ownership of Abramovich and Arsenal fans can only imagine what would have been if Abramovich had bought their team.