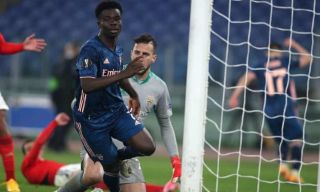 Bukayo Saka is not alone in feeling frustrated with last night’s 1-1 draw with Benfica, a match where Arsenal should have won much more comfortably.

The Gunners were the dominant side in both halves, but were wasteful in front of goal, and the scoreline leaves the fixture very-much in the balance.

In fact it was Pierre-Emerick Aubameyang who had our best chances, the one guy you would hope the chances would come to, but it just wasn’t to be.

Our young star Saka has admitted he was annoyed by the result also when speaking to Arsenal Media, after being asked his thoughts on how he felt following the full-time whistle.

“Frustration,” Saka stated. “We felt like we had the game in our hands from start to finish, we dominated them and we just needed to put our chances away. We conceded a goal that I didn’t think was a penalty, but that’s all they really created in the whole game. I think we dominated the game and we deserved more.

“I feel like they set up to defend and try to wait for our mistakes and get us on the counter attack, but I felt like we dealt with it well. We moved the ball quickly and we had opportunities in the first half and second half, so I thought it was a good performance from us.”

While my view showed that the decision was right on the penalty decision, the rest of Saka’s comments ring true. Arsenal were the dominant side throughout, and only have themselves to blame for failing to claim a win.

I feel like frustration is the perfect word for how I, and many of you will be feeling after watching the first-leg, but while there are doubts, the two same teams will be go at it once more in Athens, and if our team can dominate in the same fashion we should have no issues reaching the next round.