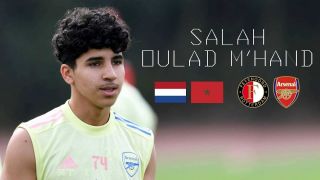 Salah-Eddine called up for Arsenal squad to face Leeds

Highly regarded Arsenal youngster Salah-Eddine Oulad M’Hand has been called up to the squad for Tuesday night’s match against Leeds United in the Round of 16 of Carabao Cup.

The 18-year-old, who plays as a central midfielder for Arsenal’s U23 squad, has been consistently impressing staff at London Colney.

Although his inclusion will surprise many Arsenal fans, that is not believed to be the case at the club’s training base.

Salah-Eddine, with the likes of Miguel Azeez and Charlie Patino, have already been touted as regular first team footballers for the North London outfit in the future.

Although the former Feyenoord man – who the Gunners acquired in summer 2020 as a free agent, will not be expected to make an appearance against Marcelo Bielsa’s side – his inclusion is testament of Arteta’s faith in him.

Since his arrival, Arteta has regularly shown his trust in the youngsters. He was instrumental in Bukayo Saka and Gabriel Martinelli signing their contract extensions in his first season in-charge.

Salah-Eddine will surely not be in the U23s for long if he continues to make an impact like this. Maybe a loan move next season.

After an injury-riven debut season, Salah is finally showing his true colours on the canvas. Despite being a central midfielder, he has six goal involvements in nine appearances for Arsenal’s reserve team.

To aid his development, the best possible decision would be to loan him out in the winter transfer window. Let him taste men’s football week in and week out for six months.

Personally, I haven’t followed Salah-Eddine since his arrival from Netherlands last year. But judging from the YouTube and Twitter compilations, he gives me Bergkamp vibes.

I don’t want to put too much pressure on him, but given everybody has only something good to say about the Dutch, he must be special.