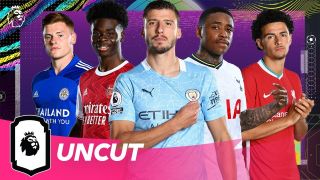 Peter Schmeichel claims that Arsenal have ‘massively underperformed this season’, while one player has been relentless in his performances in Bukayo Saka.

The 19 year-old has been our near-constant shining light amidst another rocky campaign in North London, showing amazing form throughout another campaign where he has been used in varying roles.

The versatile star started many matches on the left of a midfield three earlier in the season, with a couple of matches at left-wingback also, but has improved further since returning to his favoured role on the wings of the attack.

His performances have not gone unnoticed, and he is many people’s first name on the teamsheet at present, regardless of his position, and Peter Schmeichel is another of his fans.

The former Man United legend insists that while the Gunners have been well below their best in many matches, that hasn’t stopped Saka from impressing, before naming a number of his key qualities.

“It’s safe to say they (Arsenal) have massively underperformed this season, but he hasn’t,” Schmeichel told the Premier League’s official YouTube channel. “He’s 19 years of age, I can’t even remember off the top of my head how many times he’s been man of the match for Arsenal,” Schmeichel said.

“It’s a lot to put on somebody so young’s shoulders, but this guy, I mean wow. He’s an interesting player, we’ve seen with all the great teams that you can think about, you have players like that who can dribble, who are quick. He can cross a ball, he can cross a ball with quality, he’s strong and he’s physically very strong.”

It is crazy to think that Saka is the man who is central to everything we have going forward, at his young age, and I really don’t know how high to place his ceiling as he has so much potential and raw talent, with the mentality that should see him hit the top.

Can you name a youngster worthy of comparison in talent and ability at the same age? I’m thinking Anelka but he proved to lack the mentality that could have seen him become one of the game’s greats.