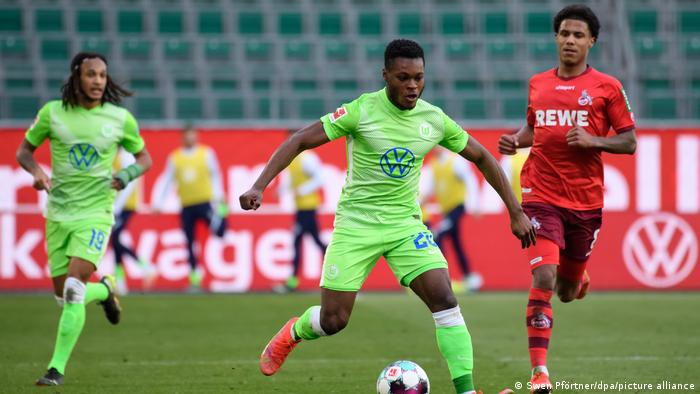 Scouting for Arsenal – Is this young German the perfect replacement for Bellerin?

With Hector Bellerin’s departure from the Emirates Stadium looking likely, Arsenal will obviously look to strengthen the right-back slot with a solid addition.

Names such as Max Aarons, Emerson Royal, Zeki Çelik and even Kieran Trippier have been thrown on the table and it will be intriguing to see which player the club will eventually end up buying.

For this article, we scouted VfL Wolfsburg’s 23-year-old Ridle Baku, who has caught the eyes of many clubs across Europe.

The young right-back was an influential piece in the Germany U21 side that won the European Championship on Sunday night.

🇩🇪Ridle Baku (23) for Germany at the U21 European Championship.

What a performance after a stellar Bundesliga campaign. pic.twitter.com/HgTauBChW2

The full-back was named Player of the Match against Portugal and even concluded the tournament with the highest assists.

Currently valued at €22.00m, the potential that the German possesses is evident. In the 38 appearances Baku made for German side Wolfsburg, he recorded an impressive 16 goal involvements.

With 36 shots taken so far, Ridle Baku has had the fifth-most attempts on goal of any VfL Wolfsburg player. Until now, he has been responsible for 46 passes to a shot and has therefore earned himself second place within the statistics of his club.

His strength lies especially in his endurance. For this reason, the 1.76m-tall defender, who can even be deployed as a midfielder, leads the ranking for the Bundesliga with 1,061 sprints. Few players have covered a greater distance in the ongoing season than him. He is currently the 10th-best runner with 351 km run on the pitch.

Baku is highly versatile too having already played in all possible positions on the right-flank of the team.

We look at his impressive stats this season for Wolfsburg below:

In the 2020/21 campaign, Baku recorded a Goals/Assists ratio of 0.19/0.22 per 90 minutes. Compared to other Premier League full backs, it was pretty impressive.

With the acquisition of Baku, Arsenal can be expected to boast a more attacking threat down the right flank, which was nowhere to be found with Bellerin. The German defender likes to be adventurous going forward with his number of Shots on Target at 0.38 per 90 making it crystal clear.

Considering how dire the market is at the right back position and I’m really not sold on Aarons, Ridle Baku might be a very smart signing. Has been impressive for Wolfsburg this ssn pic.twitter.com/egzg6pZrm6

The U21 Germany International also completed 1.35 Key Passes and 1.51 Passes into Penalty Area which placed him at the top 20 percentile of fullbacks in Bundesliga.

Baku is an apparent threat to the opposition backline. But he still needs to be coached in terms of safeguarding his own goal, due to the fact that he is more of a wing-back than full-back. Despite that, the defender’s defensive stats are decent.

Regardless, Baku’s number are not the worst in the world. In reality, they are marginally poor or slightly better than his counterparts.

Tierney’s attacking exploits last season was balanced out by the other full-back increasing one more body to the midfield, to prevent any counterattacks. But with two charging full-backs, Mikel Arteta would have some thinking to do.

Anyway, there is no doubt that the former Mainz man is gifted. He also has a high ceiling for improvement given the German is still just 23.

Thus, Arsenal wrapping up his signature in the current transfer window ahead of other names on the list would make complete sense.

Personally, if we do end up signing him, I will just be calling him by his first name. The second name still gives me nightmares.