Sean Dyche has bemoaned Burnley’s penalty luck after they had a spot-kick decision against Arsenal yesterday, reversed.

The Gunners earned a hard-fought 1-0 win over the Clarets in a tremendous boost to their resurgence after a poor start to the season.

The game could have ended differently if referee Anthony Taylor had not reversed his decision to award Burnley a penalty following advice from VAR.

In the incident, Arsenal’s goalkeeper, Aaron Ramsdale, appeared to have caught Matej Vydra while clearing a poor pass.

The referee had initially pointed to the spot before he overturned the decision after checking the monitor.

Last season, Burnley conceded a penalty from a similar incident, but the rules have changed and Arsenal were the beneficiaries of this rule change.

Dyche admits Ramsdale touched the ball before catching the player, but it might not be a clear and obvious error before slamming the seasonal rule changes.

‘Our record for getting penalties is horrendous as you know,’ said Dyche as quoted by The Daily Mail.

‘I have to say the keeper does get a touch so in theory that doesn’t given though you might question whether it was a clear and obvious error.

‘But I do get confused. Football changes, the viewpoint changes. Last season, that would have been given. This season, it doesn’t get given. In other seasons, that would be a penalty. The referee seemed clear in his mind it was a penalty.’ 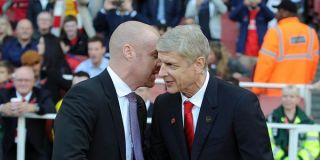 Burnley boss Sean Dyche recalls when he had to apologise to Arsene Wenger
24 April 2020, 23:15