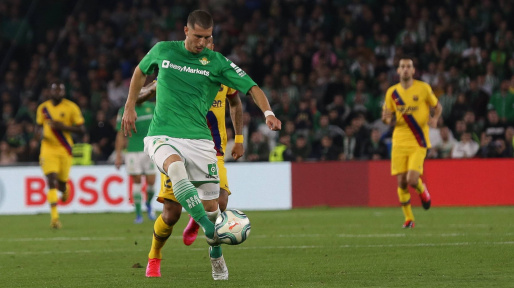 Real Betis’ midfielder Guido Rodriguez is aware of the interest in him, but said that he is happy at his current club.

The Argentine has been linked to a host of clubs in the past few months, with Arsenal being one of them.

It is believed that Rodriguez is not the only player the Gunners are keeping tabs on. Emerson Royal is also reportedly being watched by the English club.

Since then, he has made 43 appearances for the Spanish side who lie sixth in the La Liga table.

He has made a bright start to life in Seville, and thus the midfielder claims in his interview with Estadio Deportivo that he is very happy with life in the city.

When quizzed about the reports linking him to a big move to Arsenal he said, “I saw it because friends from Argentina asked me, but I told them that I knew the same as them.

“I am the protagonist because I am in the news but today, I do not know more or less than you who also saw it.

“I am very happy, I arrived and there was one or two months with a strange situation for everyone with the issue of confinement, but the truth is that I am very happy in Seville, with the city, the weather, at the club. I’m very happy.

He continued, “It feels a bit strange when we walk down the street, I would have liked to experience all this with the fans in the stadium. I could only play a few games with the stadium full.”

Some reports have suggested that it will take a whopping £68m to prize him away from Betis. If that is the case, then Arsenal can ill afford players of such profile.

They cannot just splash the cash on few good players and expect the results to somehow dramatically change.

They must act clever in the transfer window, which has not been the case too often at the Emirates Stadium.

At 26 years, he has already reached his prime.

Thus, it might be better to target younger players with vast potential, who will demand less transfer fees than the Real Betis man.