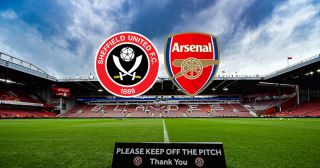 Arsenal make the long trip north to take on Sheffield United today at Bramall Lane, but they have some question marks over some of their players.

Sokratis made the return to full training this week, and was on the bench for Thursday night’s win over Southampton, but unless he is back to 100% I think he could be overlooked.

Calum Chambers(ligament damage), Gabriel Martinelli (knee), Pablo Mari(ankle) and Bernd Leno(Knee ligament damage) are expected to miss the remainder of the campaign, although the former was believed to have returned to light training.

David Luiz will rejoin the playing squad having completed his two-match ban, and is likely to start the match, but this encounter is expected to have come too soon for Lucas Torreira and Cedric Soares, who are both hoping to return to action in the coming weeks.

For reasons currently unknown, Mesut Ozil is yet to get the nod to play since the restart, with manager Mikel Arteta making him warm the bench for the two most recent matches, and his participation today could be a huge telling point.

I believe Saka will be hoping for a return to his preferred winger role, and today may well give him that opportunity, although Nicolas Pepe has been a stand-out performer for us over the past week.

Aubameyang may get to sit out the entire 90 minutes if the result is going our way, as he will be crucial in the remainder of our season, while youngster Zach Medley could get a chance to make his fourth senior appearance if selected for the squad.

Guendouzi was dropped from the squad for Thursday, but he could also be in line for a return, but I think the manager may opt against putting him straight back into the line-up.

Could Arsenal opt to play with a back three today? Will Arteta take a risk and leave Aubameyang out of the starting line-up? Does the above team have more than enough to dispose of Sheffield United?