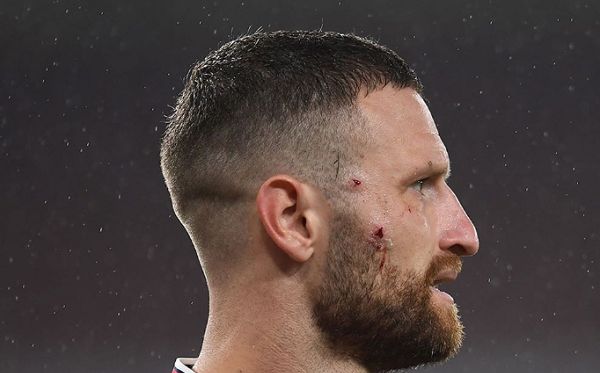 Shkodran Mustafi mocks VAR after his injury against Leicester City

VAR was the centre of controversy again as Arsenal were held to a 1-1 draw by Leicester City.

The Gunners had Eddie Nketiah sent off almost immediately after he came on as a substitute for them.

He was initially given a yellow card before VAR advised the referee to have another look at the incident, and he upgraded the card to a red card.

The teenage striker will miss Arsenal’s next three domestic games now. However, Jamie Vardy had been involved in another foul play earlier and VAR didn’t recommend a card.

The Englishman came together with Shkodran Mustafi and he left his studs in the German’s face which injured him.

The referee didn’t see Vardy’s act, neither did VAR see it as a foul.

After the game, 433 made a post on Instagram with Mustafi’s wounded face and captioned it: “Football = War”

The German slammed VAR under the post by commenting: “VAR still checking”

Mikel Arteta wasn’t happy with Nketiah’s sending off and he made that known after the game, adding that Vardy’s warranted a sending off too if Nketiah’s does.

Arteta said as quoted by Sun Sports: “With the red card decision, he doesn’t see the player and you have to know that he is a young kid.

“But if that is a red card then Leicester have to play with 10 men after 42 minutes [when the Vardy-Mustafi clash happened].