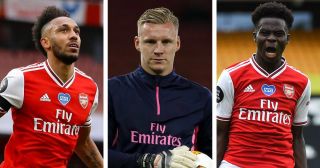 Shortlist confirmed: Who will be Arsenal’s Player of the Season 2019-20?

Arsenal have confirmed their three-man shortlist for their Player of the Season award, with Bukayo Saka going up against key stars Bernd Leno and Pierre-Emerick Aubameyang for the award.

The 18 year-old would likely have laughed at the thought of being shortlisted for the award 12 months ago, having only picked up seven minutes of Premier League action before the start of this season, but has been an integral cog in the team throughout the term.

Saka has picked up 38 appearances in all competitions in his breakthrough season, and may get a number of votes to pick up this prestigious team award, as he looks to take Jack Wilshere’s title of being the youngest ever winner of the award.

Bernd Leno was definitely amongst our better players of the campaign, but following his loss to injury, some fans are claiming that the German should stay on the bench when he returns, which tells me that many of our club’s followers may have forgotten about the great work he has done during a tough campaign, and also tells me he will likely be overlooked for the award.

Nobody can ignore the season that Pierre-Emerick Aubameyang has had though, with his future also being talked about constantly throughout.

PEA has refused to allow his future to distract him from finding the back of the net, scoring 22 Premier League goals in consecutive seasons, and while I would be more than happy to see Saka walk away with the award, it would be harsh on the Gabon international.

You can cast your votes for the award on the official Arsenal website here.

Has Saka done enough to land the award? Could Aubz contract saga with the club affect the fans voting?