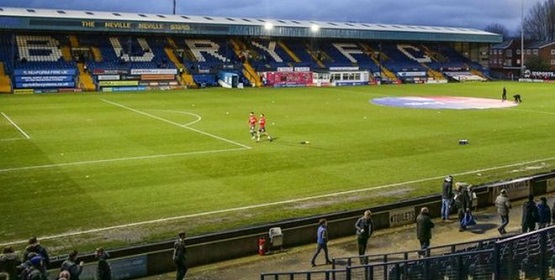 Should Arsenal and the EPL help bail out Bury FC?

Should The Prem Help Bury? By Dan Smith

As I write this Bury are trying to find financing to not go into liquidation. They are trying to get a deadline to prove to the EFL that any solution can clear outstanding debts, pay staff salaries and clear stadium regulations to be able to fulfil their fixture obligations, and have been given until tomorrow to find the fix.
When your best-case scenario is being bottom of League one with a points deduction you know its dark times. Owen Stewart Day say debts are over 8 million, not all caused by him, but when he brought them for a pound the assumption was that he had the pockets to deal with those problems.

That he may be not as wealthy as he thinks, he is again calling into question the process of how anyone, it seems, can gamble with a club with such a history. It’s not a good advertisement for the English game that a former FA Cup winner can go bust when so much money is in the game.

You can’t help but look at the Premiership and not see the irony. Don’t get me wrong; in the ruthless world of business Bury have made mistakes and an Asda wouldn’t rescue Tesco, or Costa help Starbucks. I’m naive for thinking someone becomes a millionaire by giving handouts. Yet you can’t help but think 8 million, life changing to us, is peanuts divided by 20 Premiership Clubs. Clubs who share a contract worth billions for TV rights.

Don’t we make 3 million a matchday? Didn’t we just give approx 8 million to Pepe agent? I’m just saying if the Prem wanted to do a whip round, they quickly raise that total. Not all owners are ogres, nor players, they will recognise the only people getting hurt here are the fans. Businessmen will find other work, players will find clubs, football will carry on.

It’s those who every other Saturday gone to Gigg Lane for decades, passed on through generations whose town might not have a club. Maybe there is a rule where it’s not as simple as Arsenal writing a cheque. It could be seen as an unfair advantage as then all lower League sides will want help. I just feel there is enough resources where something could have been done in the summer, a friendly or something.

Looking at the wages and fees, how in 2019 can English Football, when It’s got more money than ever before, let this happen?