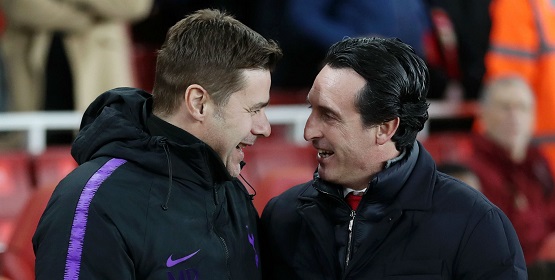 The question is being asked widely now among Arsenal fans. Should Arsenal sack Unai Emery and hire Mauricio Pochettino?

This one is going to rumble on sadly and that is such a bad reflection on Arsenal and the state we are in.

After the initial laughing at Tottenham sacking their manager the realisation quickly set in that they are actually acting like a big club.

Even worse, they may end up with an elite coach to take them to the next level. All the while Arsenal are stuck with Emery.

OK, now hang on, I accept that Pochettino did a good job at Spurs considering all their circumstances but please get some perspective here.

Let’s have a look at some numbers, the Argentine lost more games than any other Premier League team in 2019 in all competitions, a massive 18. Think about that for a minute. That is worse than Emery, that is worse than anyone, that is called relegation form.

Another little fact, last time Tottenham won way from home in the league was against relegated Fulham last January and even that took an injury-time winner.

Emery’s away record is bad, but it is not that bad.

They have had their worst start to the season than any other Tottenham manager over the last 11 seasons.

And of course, under Pochettino they have won absolutely nothing.

Is that really the sort of manager that Arsenal fans want?

There are huge positives, he stopped St Totteringham day, it was a stunning achievement to reach the Champions League final on the back of no player purchases for two transfer windows when not playing in their own stadium.

But how can his league form in this calendar year be ignored?

When I stuck my earlier rant up about Arsenal fans taking to Twitter to call for Pochettino to replace Emery I thought all my fellow Gooners on here would support that view.

I am stunned to the core that the majority that commented would welcome him to the Emirates.

So, in all fairness, I ask this question. Should Pochettino replace Emery?

Please do not say just yes or no in the comments, explain why you want him. I have shown his form over the last year, I have explained my reasoning. Please do the same.