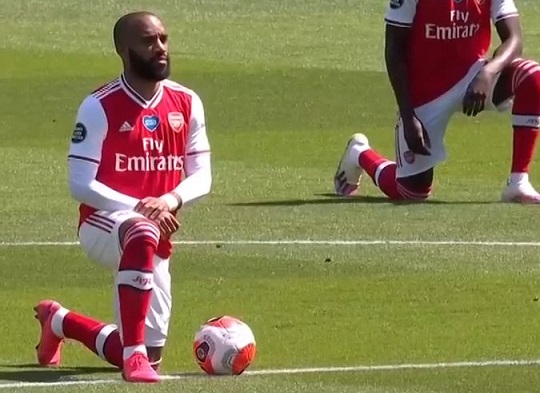 Should Arsenal continue to take the knee before games? Is it pointless?

Would You Take The Knee Anymore? By Dan Smith

Okay he played for Spurs, but It’s hard not to respect Les Ferdinand for speaking out on QPR’s behalf concerning why they will no longer be taking part in taking a knee before kick offs, saying the message had ‘become diluted’.

The Director Of Football was responding to why his club, and their opponents on Friday, chose to not take part in a ritual that has become commonplace since the death of George Floyd.

Ferdinand told CNN: “No one is more passionate than me about this topic. I have spoken on the matter throughout my footballing life,”

“I work for one of the most diverse football clubs in this country. A lot of people are being fooled out there.

“Recently, I took the decision not to do any more interviews on racism in football because the debate was going around in circles. People want a nice soundbite when something happens, but how many of the media who have criticized QPR over the past 48 hours genuinely want change?”

“What are our plans with this?” he added. “Will people be happy for players to take the knee for the next 10 years but see no actual progress made?

“Taking the knee will not bring about change in the game — actions will.”

Whatever your opinion you have to admire Sir Les for speaking out when others might have been scared to say the same things even if they agree.

It’s often easier to stay in the majority. Common sense would say not every single footballer in English Football will agree taking part in what some have viewed as a political statement, yet feel they have to respect the status quo. Imagine if you had been the one footballer who was standing when everyone is kneeling. That would leave you open to scrutiny.

Yet those at Loftus Road are trying to educate that there are reasons why taking the knee makes some not comfortable.

The Premiership themselves had to release a bizarre statement last season when there was a backlash towards the Black Lives matter ethos, and here was one of the Uk’s biggest brands giving free advertising. The statement strangely tried to enforce that they were supporting certain principles of the group but not others, such as taking away funding off the police.

In other words the League were unaware the movement had existed for years and that they only heard of them due to events in America.

That kind of backs up what Les Ferdinand was saying this week. After all, most billionaire organisations have marketing experts who would research and understand what they are endorsing.

The former striker went on to tell a story about how last August the R’s under 18 had a fixture abandoned due to racial abuse in Spain. Over a year later UEFA still haven’t handed out any kind of punishment. If, like me, that’s the first you heard of that incident, that’s kind of the point being made. The media will report protests against racism but failed to mention abuse taking place.

That’s the same governing body who when Bulgarian fans were clearly making monkey noises and Nazi salutes, their national team were fined 65,000. That’s less than Bendtner had to pay for having advertisers on his underwear.

Yet watch a Champions League or Europa League tie and tackling racism is all over the branding, commentators are asked to quote their motto and two squads now have a photo together to promote equality.

So Ferdinand is kind of correct then, the pre-match routine has become nothing more than ‘good PR’.
Let’s be honest, it’s good for the Premiership’s, Sky Sports’, Arsenal’s, etc, image that they are seen supporting a sensitive subject at the moment.

Yet if people around the world need to watch their favourite footballer take a knee to remind them to treat all people with respect and kindness, then that’s scary.

Sometimes it’s not what you do but what you don’t do. While everyone’s heart was in the right place, taking the knee since June hasn’t actually changed any laws in the sport or prompted heavier sanctions.

The French Football Federation’s response to Neymar’s allegations that he was abused, was to claim ‘there is no racism in that League’, so why are your clubs taking a knee then?

People such as I are more likely to talk about a Championship club not taking the knee compared to all clubs doing so. That to me is how you create change … with debate and conversation’.

Anyone who’s listened to Mr Ferdinand over the years knows he’s passionate about this subject, and I much prefer someone making a noise to at least try and force change compared to everyone for the next 10 years ‘protesting’ even though zero progress is being made.

It’s actually offensive to those affected by the issue and men/women who battle every day to inflict changes to see companies suddenly choose to join in with their ethos yet turn the other cheek when chances are there to show zero tolerance.

I have written before, the 20 Prem owners meet every summer to discuss any change of rules. Nothing is stopping them from all signing a document agreeing that any racial abuse from their players is punished with a season ban, or anti-social behaviour from a crowd means points deductions.

That would be teaching youngsters how serious that crime is. If your initial reaction is ‘Ifs or buts’ then that’s not zero tolerance.

Part of the Arsenal Family, Alex Scott has shared the extent of how much she gets trolled for being employed as a pundit, some feeling it’s purely based on her gender and race as some sort of TV companies ticking a Diversity box. Just think about that. In 2020 some viewers feel they need an explanation why diversity is on their TV screen.

Yet the likes of Facebook and Twitter (and have for years) refused to put an action plan in place where it would be easy to identify these cowards.

Arsenal were forced to point out they have zero relationship with AFTV after the YouTube channel used two racial slurs in the North London Derby. It took sponsors to have to spell out the seriousness of what had been said. To this day some suggest the man kicked off the channel was ‘thrown under the bus’. Yes, because he was forced to make a racial stereotype live to thousands of people?
If you went to work and said what he did and got sacked, have you been ‘thrown under the bus’?

The fact is though that’s how some feel. That tells me they are not benefitting from anyone taking a knee.

What’s the point of social media blacking out accounts in solidarity, but not doing anything to be a deterrent to racial abuse?

In the Champions League Final UEFA couldn’t wait to have Neymar take a photo under their banner of ‘let’s tackle racism’ to show their advertisers, yet where’s the players support when he asks for help?

Why is Harry Kane taking a knee, yet not leading England off the pitch when it’s clear his teammates are being abused?

So Les Ferdinand is correct to claim only actions will change the future. English players could take the knee for the next decade, wear as many shirts and wristbands as you want. None will have the same power of them refusing to carry on playing in a qualifier due to racism.

Naturally, other clubs will feel more comfortable to follow QPR and Coventry’s lead.

I don’t know how gooners would feel if Arsenal’s squad made that decision, but I would support them.

Not because I don’t want to fight the cause but taking the knee has become pointless, there’s no substance, an empty gesture. It’s saying Football is united and won’t stand against racism, yet in reality nothing happens when racism occurs.

Be Kind In The Comments…