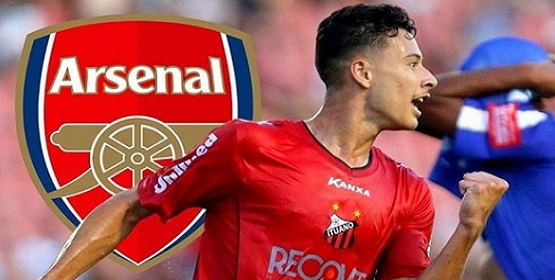 Should Arsenal give Martinelli a bigger wage than £30,000 a week?

Martinelli has been in fine form for Arsenal since joining last summer.

With so much fear in my heart, I write this piece to appeal specially to Arsenal to offer Martinelli that new contract he deserves and stop other clubs from poaching him and even taking him away from us on the long run. With rumours of clubs like Real Madrid and Liverpool sniffing around Gabriel Martinelli, it will be wise for Arsenal to tie our Brazilian wonderkid to a new contract now.

FootballInsider recently ran an “exclusive” story intimating Arsenal of Liverpool’s plan of taking our Brazilian wonder kid from us, thereby denying us the opportunity of enjoying him while he develops as a footballer. According to them, Liverpool has been impressed by the way the kid plays and are trying to see if they can convince him to change from our red jersey to theirs. They are going to try and work on him; making him see why he has to leave Arsenal. His lack of regular playing time may sway him towards their side, according to the report. Nice one from Liverpool but would Arsenal just sit and watch Liverpool and the likes of Real Madrid woo our player?

The good news however, is that Arsenal is not just going to lie down and watch Liverpool snatch this gem of a footballer from them. If reports of Arsenal considering offering Gabriel new contracts that will make him earn triple his current wages, is anything to believe, then Arsenal is on track.

According to the Mail, Arsenal is set to offer Martinelli a new contract, despite his current contract not expiring until 2024. With the new contract which will be signed at the end of the season, Gabriel will earn £30,000; triple of what he is currently earning.

Good move there from Arsenal, but offering Martinelli a new contract worth £30,000 per week may not convince him to remain with us. In today’s’ world, footballers earn massive wages and £30,000 for an emerging talent like Gabriel may not do the magic. Real Madrid are known for paying their players hefty weekly wages; this may just be what will convince Martinelli to dump us and sign for them. We can do better than what we are offering to pay him next season. We need to play the financial games with clubs, so that they will know we are no longer pushovers in football. The question now is; will the club owners invest heavily in a player who may just be a one season wonder? If Gabriel leaves Arsenal and goes on to shine for another club, won’t he come back to hurt us in the future? Won’t it do us a whole lot of good to tie him down now, no matter what it may cost us? Apart from Aubameyang, Martinelli scores goals for fun.