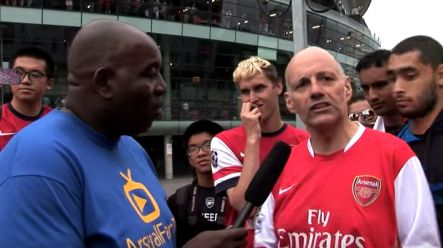 Should Arsenal have had a minute’s silence for AFTV’s Claude?

In the UK at the moment, not just in terms of football, we are becoming a nation that if you have an alternative point of view you are pressured to conform your opinion.

I respect this site for respecting my freedom of speech.

This past week Claude, of AFTV Fame, sadly passed away. Tributes poured in for him throughout the YouTube Community.

Yet the danger of social media is you exist in this little bubble that doesn’t represent the real world.

In midweek I found myself defending Arsenal when it was suggested that they wouldn’t have the class to hold a minutes applause or silence for the 58-year-old. I will criticise my club at times for how it’s run behind the scenes, but I felt this was unfair.

Of course it’s heart-breaking when anyone dies, and you wouldn’t wish that on any family to go through that unimaginable pain. Unfortunately, that doesn’t give you a divine right for your favourite Football Club to honour you.

I challenged this stance because I have written previous articles how I felt a man struggling with mental health was being exploited instead of helped.

I wrote that when he was alive, and feel it’s wrong to not be honest just when someone has passed.

When you feel lonely and isolated (as Claude admitted to), views and subscribers can become your validation.

My articles get traction. Sometimes I get lovely comments, often I get readers who want to call me names.

I’m aware though that’s it’s not real life. It’s a world where it’s easy to hide behind a key board and therefore many are not thinking before they interact. The majority wouldn’t in a debate say to your face the words they type. Some as a hobby just try to pick a fight as a source of attention.

It scared me that there’s a minority out there who think their world of Fan Channels is bigger than it is. That because someone who provided content that was entertaining should qualify for Arsenal FC, one of the biggest clubs in the world, holding a pre match ritual.

Think how self-involved that is?

That if you make a successful YouTube Channel, one of the biggest institutions in England should mourn one of your peers how you see fit.

It was argued to me that the Gunners should understand that this was a lifelong fan.

No one disputes that. Nor do they dispute what a lovely gentlemen Claude was.

Yet law of averages he won’t be the only man /women / child who passed away last week. There is no nice way to write that.

There will be those who passed who lived for Arsenal, who’s loved ones would be tickled by the idea of the club paying their respects.

In an ideal world Arsenal would hold a mins silence for every fan who dies and pay for their funeral.

Yet what some are saying is Claude should be given the honour because he was popular for a company that had nothing to do with Arsenal.

Yes, he spoke about Arsenal, but the club have on more than one occasion distanced themselves from AFTV and stressed their content has nothing to do with them.

In fact what Claude got his notoriety for was verbally abusing players and was sacked for a racial slur.

This was a man who didn’t have the respect to applaud Arsene Wenger in his final home game because he didn’t want to be accused of hypocrisy. Was that love for Arsenal or designed for his own agenda?

Just because he’s not here doesn’t mean you re-write history.

Arsenal never liked him calling the greatest manager in their history the C world or telling him to F off.

As I told people (and was called all kinds for this), there was reference to David Rocastle at the Emirates before our kick off against Liverpool but zero mention of Claude. Some on social media were unhappy with both the club and Sky Sports for only mentioning The 20-year anniversary of Rocastle’s passing.

Yet some think that a Youtuber shouting into a camera is the same thing?

Claude is an AFTV legend. He’s not an Arsenal legend, there’s a difference.

Yes, he loved our club. There are gooners who love their club who work in the NHS, who put out fires, who do charity work. Guess what? They won’t get a minute’s silence from Arsenal either.

I’ll tell you a story.

A Gooner had terminal cancer. Before they died, they contacted Arsenal and asked if they could transfer their membership to their sons name so he could carry on the family legacy of attending live games.

The email came back. “While sorry to hear you are ill, our policy means you are unable too.”

Because just like any business, Arsenal are ruthless and are all about making money.

One day I will die.

Admin might say, ‘he liked to write about Arsenal’.

Readers might say they liked or hated what I wrote.

My family will say how much I loved this club.