A few thoughts on the possible transfer rumours regarding AMN – again.

The main problem is that Arteta won’t let AMN start in his best (for Arsenal as well as himself) position. Bearing in mind that AW said long ago that central midfield would become AMN’s best position, here is where AMN went wrong – twice in my opinion:

Mistake 1) AMN said “I just want the same chance as others to play in my best position of central midfield.” He was probably referring to Willock.
Result – spent most of his time either on the bench or in a full back position when needed. Arteta’s thoughts/reasoning? Perhaps “No player is going to tell me where he should play – I know best!”
He was then brought back late on in the season, not as a FB but in the better position of LWB, where he drew rave/MOTM type reviews for his performances in the cup semi-final, cup final and the shield – against 3 top teams.

That probably went down like a lead balloon with Arteta, and once again we saw AMN on the bench and only recently getting a start, this time swopped over to the right as a RWB. 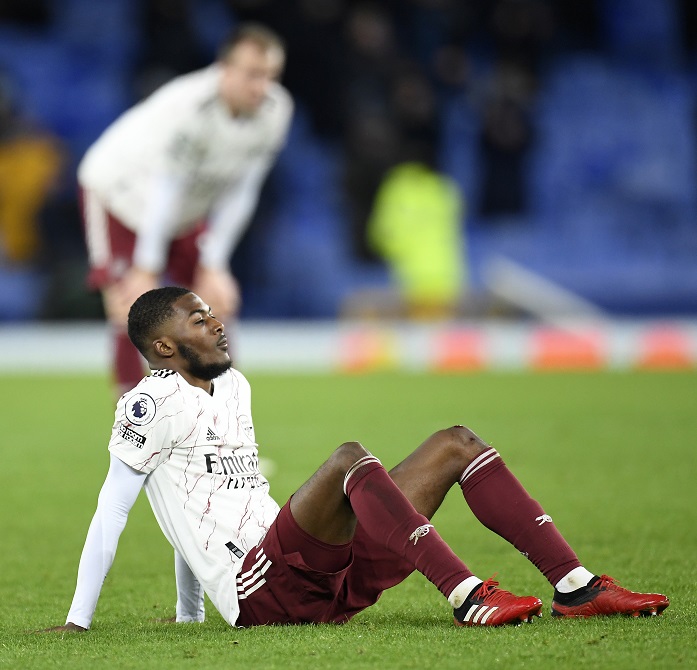 LIVERPOOL, ENGLAND – DECEMBER 19: Ainsley Maitland-Niles of Arsenal looks dejected following his team’s defeat in the Premier League match between Everton and Arsenal at Goodison Park on December 19, 2020 in Liverpool, England. A limited number of fans (2000) are welcomed back to stadiums to watch elite football across England. This was following easing of restrictions on spectators in tiers one and two areas only. (Photo by Peter Powell –

Much to the disgust of many, Arteta continuously plays his favourites, Xhaka being the worst example. Some of us have known for some time that Xhaka is pretty useless but it seems he’s the first name on Arteta’s teamsheet. Arteta maintains he picks the team from how they go on in training so Xhaka must play like a combination of Partey and Messi!

I do not believe one word of Arteta’s statement that “Everyone starts with a clean sheet . . .” His words say one thing – his actions prove the opposite. I believe he holds grudges towards some players. Perhaps he has a fragile ego but if so then it is detrimental to Arsenal. If he stays then let’s hope he forgets his ego and starts making some good decisions in all areas. His latest decisions have been awful.

Regarding a move to Atletico: If Simeone told AMN he would play in the position vacated by Partey I think he would seriously consider the move. Not so sure he’d go if offered any other position.

In fact I believe that if an offer came in from any EPL club offering AMN a starting position in central midfield then AMN would be giving it serious consideration – much like Emi’s decision to move to Villa for the good of his career.

If this happens I totally agree with many at the Just Arsenal site that letting him go would be yet another monumental mistake by Arteta.

Is this proof that Arteta is managing the Arsenal rotations perfectly?
21 February 2021, 11:05