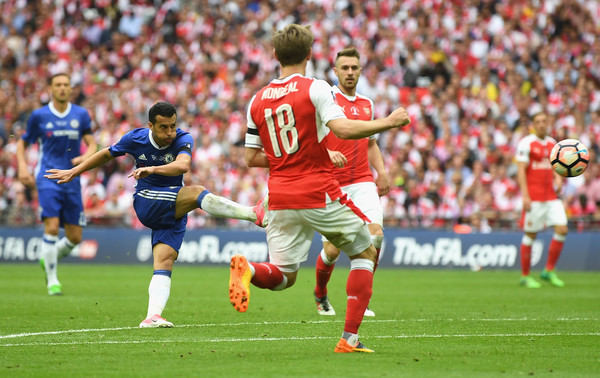 Arsenal have taken experienced players from Chelsea in recent seasons, and their most decorated current star is now set to leave the club in Pedro.

The 32 year-old has won a host of honours in his playing career, whether it be with Chelsea, Barcelona or even World Cup and European Championships winners Spain.

The winger has now revealed that this season will be his last in west London, and he will be available to join a club for free come the summer.

“I’m terminating my contract, but right now it’s not the most important thing, nor have I stopped to think about it,” he revealed.

“From there on what has to do with my future will come, but right now it’s not the most important thing when you don’t even know when you’re going to train again.

“(I’ve talked with) Jordi (Alba), with someone else… and the same, living this situation with much chaos, with uncertainty.

“The confinement, which is also complicated … a little difficult and hard on everything.

“I have not been able to travel either and see my children. I had a chance to be with them, and I could not travel”.

It remains to be seen just what implications the current world situation will have on the transfer window, with the possibility that borders could remain closed for some time in some countries, but you would expect that Pedro would be keen to return to Spain, should it be possible that is.

Spain is currently on lockdown, with the borders believed to be closed, and should a move back to Spain be off the cards, maybe we could pose an attractive prospect.

Pierre-Emerick Aubameyang is currently expected to quit the club in the coming window, and we could be in need of more experienced players around following his departure.

Pedro has recently earned back a regular playing role in Frank Lampard’s Chelsea side, and could be a great role-model for our young playing squad.

Would Pedro help cover the departure of Aubameyang? How much would the younger players benefit from having him in and around the squad?