Should Arteta think of resting players for the Newcastle match?

Maybe Arteta should consider resting a lot of players in our next game! By Sylvester Kwentua

Hello again friends. I wish to quickly share with you what I feel Arsenal should do to revitalize the team to successfully persecute their next match against Newcastle United.

Against Liverpool, I noticed extreme fatigue in some of our players, especially the ones who have been driving the team on. From Smith-Rowe to Saka to Partey and then Aubameyang, I saw extreme fatigue in them. Partey and Aubameyang had injury concerns during the international games, down to a day or two before our game against Liverpool. Against Newcastle, I suggest Arteta rests these players, and allows them to get really fit before slowly easing them into play.

As for Saka and Smith-Rowe, they have played a lot of games recently and they look like they could do with a well-deserved rest.

These young lads are still developing and playing lots of games will wear them out faster than expected. Fine, I get that they are doing well at the moment, and it will only be fair to play them, since they are in a fine form, but we need to also think about protecting these players from wearing out before achieving their full potential.

Famz, these are not the only players that should be rested, several other players who featured in that game, look like they could do with a rest…

I don’t know if you guys also noticed how some players were nowhere to be found in the first half that Arsenal played better? In the first half, our midfielders found it hard supplying the strikers with passes to score, even when they found a way to lay a pass, the strikers didn’t score!

I believe we have other players who can get us the three points against Newcastle United if the coach decides to rest some of the players who played on Saturday, right? 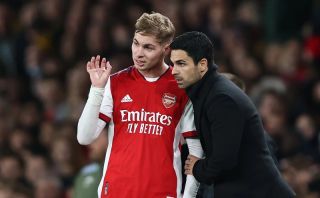 Arsenal sweating over playmaker ahead of Everton clash
6 December 2021, 10:40