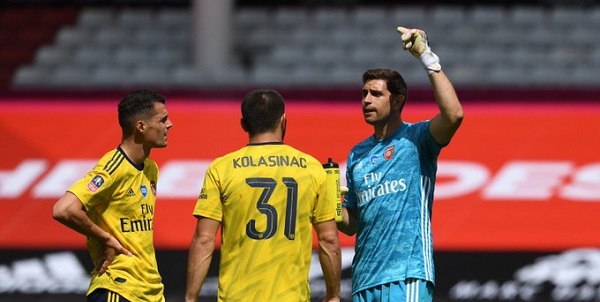 Arsenal got their second consecutive win when they beat Sheffield United in the FA on Sunday.

The Gunners survived a late scare from the hosts to win the game 2-1 at Bramall Lane, thanks to a late goal by Dani Ceballos.

Mikel Arteta made several changes to his side ahead of the game with the likes of Eddie Nketiah and Pierre-Emerick Aubameyang all starting on the bench.

He also made some interesting changes at the back as he started Sead Kolasinac in an unfamiliar left centre-back role while also fielding Kieran Tierney as a wing-back and Bukayo Saka as a left-forward.

It was a new system that the Spaniard had used in the game and some players did adjust accordingly, while others struggled.

One player who was far from his best in the game was Kolasinac and after his error cost Arsenal a goal, some fans think it would be best for the club to sell the defender.

These Arsenal fans took to Twitter to attack the Bosnian and some have asked the club to get rid of him.

Ludicrously basic stuff from Kolasinac. So often when the ball breaks to him in the box he seems to be utterly unaware of his surroundings and not thinking at all about what he needs to do.

We need to sell Kolasinac

After the final whistle, Xhaka pull Kolasinac to the side and laid into him for making mistakes leading to the goal

Kolasinac said there wasnt anything he could do, Xhaka calls over the Keeper to support his case and laid INTO Kol some more

We need to sell Kolasinac 🚮🚮

Kolasinac is a liability and should be sold this summer

I have to say that some of the criticism of Kolasinac does seem a bit harsh, he is not the worst defender at Arsenal and it was a new system he had to adapt to.

Additionally, there has been next to no stability at the back this season and only when there is that stability can the players be judged fairly.