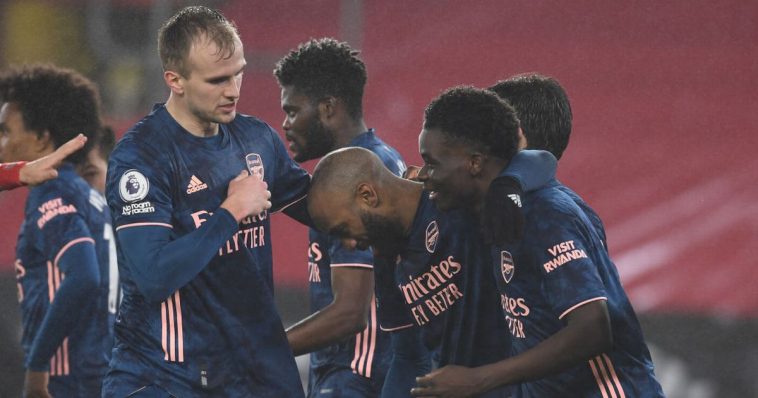 Jamie Carragher insists that Pierre-Emerick Aubameyang and Bukayo Saka would have taken the chances that their Arsenal team-mates failed with today.

The Gunners duo were both unavailable for this evening’s clash for different reasons, forcing the manager to bring in both Gabriel Martinelli and Nicolas Pepe.

Our side missed a host of chances, with David De Gea barely challenged in front of goal, and the former Liverpool defender insists that both Auba and Saka would have punished the Red Devils had they been in the same positions as their team-mates today.

“You think of where they had their success from last season and it was down to being really organised – like they were today – and having that x-factor on the counter-attack when the opportunities came,” Carragher said during Sky Sports analysis of the clash.

“Towards the end of last season under Mikel Arteta, that was a big part of the FA Cup win and how well they finished last season, having that world-class finisher.

“But you look at the front three today. Think of Alexandre Lacazette. Think of Willian. Think of Nicolas Pepe, it has never quite happened for him really since he came to the club.

“You just think of how much they miss Bukayo Saka and Pierre-Emerick Aubameyang, of course. It makes a huge difference. If those two had been playing today and those chances had fallen to them, they would have taken them. That is the difference in quality.”

On paper, the Kieran Tierney’s absence appeared to have the biggest effect on the squad with one of our right-backs having been drafted in as cover, but I personally felt like Saka was the player we would miss the most. While Aubz had just returned to form against Newcastle, I feel like Saka’s presence energizes the players around him, as well as having the ability to win the game himself.

Would one of Saka or Aubameyang being available have made the difference today?