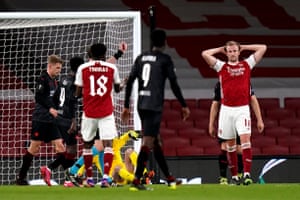 Slavia Prague have scored at the death to level the two-legged tie with Arsenal at the interval.

From early on the Gunners were on top. We were the most comfortable in possession and was working our way up the pitch well.

Unfortunately that final ball was lacking a lot of the time, and Alexandre Lacazette starting to take on shots that weren’t particularly necessary.

After a spell of dominance, the game became rather flat, but just as the half was drawing to a close our best chance came. Bukayo Saka beat the offside trap to sprint into the box at the goalkeeper, but after taking all the time in the world to pick his spot he puts it wide.

The youngster wasn’t at his best in the second-half either. We broke into the final third in numbers, for Saka to pass or cross (I’m not entirely sure) way over the heads of his team-mates, with Willian eventually stopping it from leaving for a throw-in.

The team didn’t appear to be making the runs or taking those risks that a team playing with confidence does, but a triple change of Martinelli, Aubameyang and Nicolas Pepe brought newfound energy.

The Brazilian took on a half-chance from outside the box but it drifted over the bar, but the breakthrough finally came in the final 5 minutes.

We hit them on the counter at pace, with Granit Xhaka’s long ball finding Pierre-Emerick Aubameyang, who cuts back to see Nicolas Pepe sprinting towards goal and plays him in. The Ivory Coast international places his effort into the net and we looked destined to take the advantage to the Czech Republic.

Injury time ticked down and Slavia pulled it back. They had a corner with just one minute of injury time left on the clock, and somehow managed to sneak it in.

I can’t say that Arsenal really deserved to win the match, but I can’t help feeling robbed either. We were definitely the best team on the night but our finishing has become somewhat of a joke…