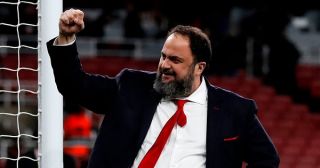 So the disruption from the coronavirus begins…

I hope Coronavirus doesn’t cause an extension of the Premier league?

Hi Friends around the world. I was so much in an expectation mood this morning; I was eagerly waiting to watch Arsenal take on Man City and beat them, until it was announced that our game had once again been postponed due to the fear of Arsenal players contracting the deadly Coronavirus. This could just be the start of the coronavirus disrupting Arsenal’s games. From a health point of view, it was the best decision to take at this moment, as nobody was sure which of the Arsenal players or staff had contracted it. Stories have it that the Olympiacos owner (and Nottingham Forest owner) Evangelos Marinakis had announced he’d contracted the illness, and this comes not long after his presence at the Emirates Stadium for our recent Europa League defeat.

It is good to protect our players and people that they may have come in contact with, but my fear or concern about all these issues, is the fear of this season will be extended by some weeks as a result of postponed or rescheduled football games.

However, without trying to sound inhuman or inconsiderate, I will say here that if it means cancelling or postponing all the remaining games of the season to keep the players and staff of Arsenal safe, then I will gladly support it and just hope that we find a solution to this killer virus, soon. I will like to end this write up by wishing everybody a corona virus free life.

Please let us remain safe at all times. We are Arsenal and we are proud.