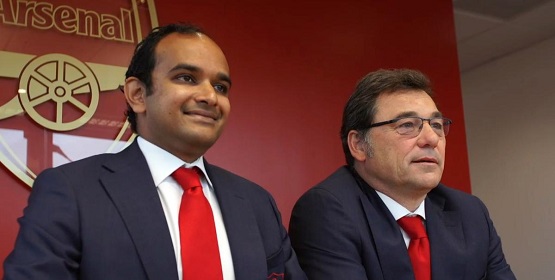 Some very encouraging news from Arsenal bosses over more signings

It is no secret that Arsenal needs a central defender and judging by the comments of Arsenal’s head of football Raul Sanllehi it seems the club have also realised this.

Sanllehi was with technical director Edu and managing director Vinai Venkatesham at last nights Q&A at the Emirates Stadium and when asked specifically about incoming players, especially a central defender the Spaniard said

‘I cannot say a name because I wouldn’t be doing my job,’

‘If I say a name, I walk out the door tonight and he’s £10m more expensive.

‘The transfer window is a moving target, I have been doing this for 16 years now and I know that some windows are harder than others.

‘This is a particularly hard window. When I talk with other clubs, this is a common knowledge.

‘There is a bit of stagnation in the market and you don’t see the number of signings you normally see just yet.

‘I don’t know exactly how things will turn out, but I can assure you we are working every hour of every day. I think it’s a bit like school, where you evaluate your grade at the end of the school year and not in the middle.

‘What is most important is to talk with the coach, about how he is feeling about the team, what system he wants to play.

‘He knows more than anyone, more than me, about what he wants. We’re going to do our best and we will keep working, but I will not mention any names.’

So, reading between the lines it seems to me that they have identified a central defender but are keeping it under wraps for obvious reasons.

It also appears that negotiations are not going easy and that we are going to have to wait until the end of the transfer window to see the whole picture.

I could be reading it wrong of course, but I don’t think I am and that is good news as far as I am concerned.

For me, it would be a successful transfer window if we strengthen the defence, we have already strengthened the midfield with the signing of Dani Ceballos and I am satisfied with the forward lineup already.

Sorting out the defence will be the difference between success and failure in my opinion and I have to say that the latest comments from Sanllehi have given me encouragement.