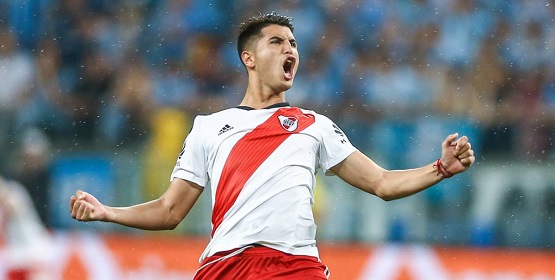 South American midfielder confirms Arsenal is interested in him

It has been confirmed from a very reliable source that Arsenal is interested in signing a young South American midfielder as a possible long term replacement for Aaron Ramsey.

That reliable source is the player himself.

River Plate midfielder Exequiel Palacios has been speaking about his future and admitted that he was proud that clubs like Real Madrid and Arsenal are keen on him.

The 20-year-old is considered one of the brightest prospects in South American football and could have joined the Spanish giants in a £20 Million deal last summer only for it to be derailed due to injury.

And while Real are still thought to be considering a move for the youngster it is Arsenal that is now seen as the new frontrunners.

What is weird about the Real Madrid offer is that it was actually £2 Million above the player’s release clause, make of that what you will.

This rumour is not really a new one but it is now more credible due to Palacios comments though that is no guarantee that he is on his way to the Emirates, it is one thing being interested in a player and a whole other thing actually following through on that interest.

It is also a little worrying that we would splash out a significant amount of our budget on a young player that is far from proven in the English game.

I am not sure now is the time to be taking risks but if Palacios is as good as is being intimated then maybe splashing out £18 Million is justified, we will see.