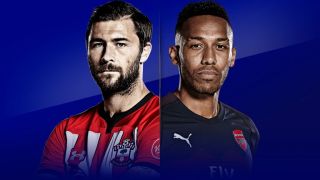 The Saints play host to Arsenal this evening in the Premier League, with the sides having very different outlooks on injuries currently.

Southampton come into the tie without a single player on the sidelines, with Shane Long expected to return following a muscle complaint. They will be without Moussa Djenepo who is suspended however.

The Gunners however have a growing number of players in the physio room, with their defence taking a big hit since the Coronavirus pandemic which stopped play for over three months, while they also have one player forced to miss out through suspension also in David Luiz.

Pablo Mari (ankle) failed to make it through the opening 25 minutes against Manchester City last week, and is unexpected to return this season. He joins Calum Chambers and Bernd Leno on the long-term injury list, but it doesn’t stop there…

Sokratis and Granit Xhaka may have made the trip tonight, but are not believed to be fully-fit, while Gabriel Martinelli is set to meet a knee specialist this week as we look to learn more about his struggles, having suffered with discomfort in training on Monday, but Mikel Arteta is expecting a long lay-off for the talented youngster. Cedric Soares has not played yet but is still recovering from a nasal fracture, and Lucas Torreira is also not recovered from his ankle injury.

As tough as it is predicting Mikel Arteta’s formation, and whether the manager will opt to bring Mesut Ozil back in after consecutive losses, I feel like Saka playing in a midfield three remains the most likely option.

This formation gives us extra numbers in midfield, and with our defence struggling at present, I’m not sure Arteta would be able to justify putting Ozil into the side knowing we need the cover at the back.

With the games coming thick’n’fast, I’m expecting Maitland-Lines to get a start in the near future, but Willock appears to be ahead of him currently.

Will Ozil be brought back in tonight? Are any players looking a little jaded already after the restart?

What is your predicted Arsenal XI?