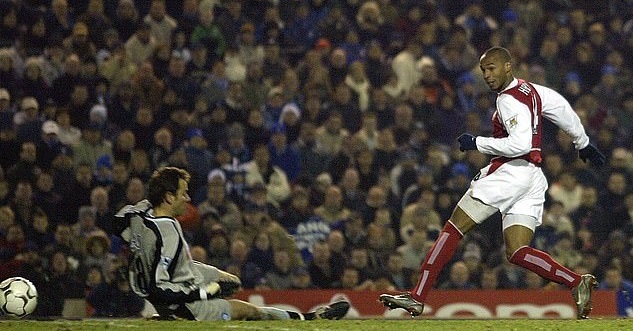 It was a very special day when Thierry Henry scored his 100th goal for Arsenal against Birmingham in 2003 at St. Andrews.

The story goes that Henry was unaware of the milestone, and happily swapped shirts with Robbie Savage at the final whistle, but by the time he realised the importance of the milestone, Savage had already snuck off home with his prize.

Savage had the shirt framed, but last month he had a change of heart and offered to return it to Thierry. Savage admitted on BT Sport (as reported in the Daily Mail): “I have a confession to make.”

“When I played against the legend that is Thierry Henry for Birmingham, he scored his 100th goal at St Andrew’s,”

“After the game I asked to swap shirts with him, I gave him my shirt.

“I don’t think he knew he’d scored his 100th goal in an Arsenal shirt. I took the shirt, put it in my bag.

“When he realised, the kit man knocked on our dressing room, and said ‘Thierry wants his 100th goal in an Arsenal shirt back’.

“I hid, snuck out the back door and took it home, and I’ve got it here. The actual shirt he scored his 100th goal in.

“Thierry, I’ve got the actual shirt you scored your 100th goal for Arsenal in. You can have it back. Wherever you are, I’ll send it to you.”

Henry, who ended up scoring 228 goals for the Gunners, responded and they both agreed to auction the shirt to help out the NHS Charities at this time, and Savage has now announced…

an incredible £16,100 raised for @NHSCharities from the auction of my @ThierryHenry 100th goal in an arsenal shirt shirt ! Thank you so much to the buyer , what an unbelievable amount of money to the NHS 🙏🏻❤️ https://t.co/uMZ7M8UnnV thank you @DailyMirror for setting it up

That is a great story, and it has had a very happy outcome for the NHS Charities, who need every penny they can get right now. Congrats to Henry and Savage for coming up with the idea…