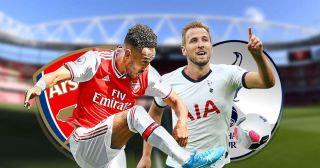 Arsenal will make the short trip to the Tottenham Hotspur Stadium this afternoon for the North London derby, and could be boosted by returns from injury.

Thomas Partey has been missing since the loss to Aston Villa just before the international break, but returned to training yesterday as confirmed by Mikel Arteta in his press conference (via our Twitter).

Unfortunately there is no guarantees that he will prove his fitness in time to feature however, but the player is pushing to get back involved, and fingers crossed he is ready to play.

David Luiz may also be ready to return to action after his collision with Raul Jimenez last week. The backroom team opted to rest him in midweek to allow his gash time to recover.

Gabriel Martinelli is the only player confirmed by Arsenal as missing through injury, as he continues his rehabilitation from the knee injury he suffered in June, while there could be a first Premier League appearance of the season for Pablo Mari, who made his long-awaited return to action on Thursday.

Nicolas Pepe is also absent thanks to his disappointing red card against Leeds two weeks ago.

I feel like Laca’s confidently taken goal will get hi back in the team today, although I’m not sure if Arteta will opt with a 4-2-3-1 with Laca in behind, or return to the 4-3-3 with Aubz on the left (as above).

Who do you expect to get the nod to start the big game? Did Mari look fit and ready enough on Thursday to deserve consideration?