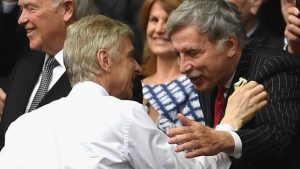 Nowadays there seem to be just as many Arsenal fans calling for Stan Kroenke to get out of our club as their is asking for Wenger to get the sack, but the Silent One has made it very clear that he has no intention at all of ever selling the Gunners. Kroenke said: “There are a lot of easier ways, so many easier ways, to make money, I assure you! You guys talk about the downs, maybe that’s the nature of it, but if you’re just trying to make money there are a lot easier ways to do it.

When asked if he would ever consider selling the Gunners, Kroenke added: “No, absolutely not. That’s just not our model, not what we do. I’m at a stage in life where what good does that do?

“There’s nothing else like it. That whole afternoon and evening, we talked about what happened on the pitch. That whole evening – how wonderful was that?

“Once you have that feeling, you want it again because there’s nothing else like that. You hear people say: ‘I’d do anything to have that again.’ Believe me, that’s how you feel. You really want that feeling again.

“We shouldn’t sell that short. Do we want to win more? Absolutely. We want them. We have to do better but don’t sell short the FA Cup and Arsene’s record setting.

“His record of consistency through 20 years. We did fall out of the Champions League but with four more points than finishing second. It’s competitive and arguably more competitive.”

So, no matter what the keyboard warriors on JustArsenal think, the FA Cup IS a prodigious trophy to our owner as well as the players and fans who have a fantastic day out at Wembley. It is not easy to win 3 of them in 4 years no matter how good a manager you are so I don’t understand why many fans say they simply don’t care about it. Do they not even bother watching when we are in the Final?