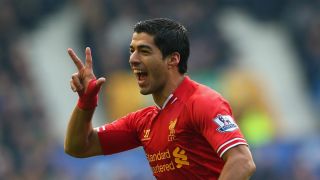 Luis Suarez has admitted that he wanted to leave Liverpool to join Arsenal back in 2013, before he ended up staying put.

The striker was widely reported to have been close to a switch to north London, with some claims that Arsenal failed to meet his release clause by £1 at the time, but Arsene Wenger later claimed in his autobiography that the clause was later revealed not to have existed.

The player himself now admits that he had wanted to make the switch from Anfield to the Emirates back in 2013, having grown frustrated with his side’s failure to qualify for the Champions League.

“I think I’d been at Liverpool for a year and a half when Brendan took charge in July 2012,” Suarez told UEFA.

“Back then, I had opportunities to sign for other clubs who were getting in contact with me, but he phoned me when I was in Uruguay on holiday, to tell me that he had another way of thinking, that he wanted to change the club and its philosophy, that he wanted the club to get back in the Champions League and fight to win big trophies, that he was going to make the team play great football.

“He asked me to believe and trust him. I enjoyed that chat. I liked his conviction, the philosophy he wanted to implement at the club, so I talked to my agent and the club to say that I didn’t want to leave, that I wanted another opportunity to be successful at Liverpool.

“That year wasn’t as good as we wanted, but ideas were already pretty clear. So then the 2012/13 season goes by, and I wanted to sign for Arsenal, since Arsenal had played in the Champions League every season prior to that.”

I can’t help but believe that Arsenal would have mounted a serious title challenge with Suarez in our side at that time, knowing that he was amongst the best natural goalscorers at the time and retains such ability since, even now at the age of 34.

It seems crazy now to believe that we had an agreement in place with one of the best strikers of the current era, with the player and his agent wanting to make the switch happen, but you can imagine how strong he could have made us…