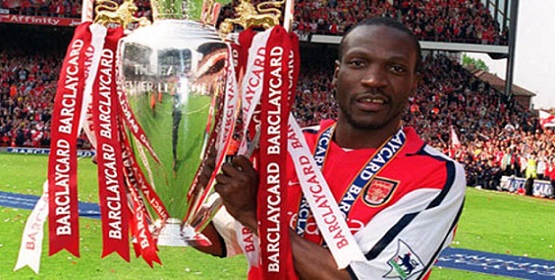 Lauren is an exclusive club as one of Arsenal’s ‘Invincibles’. He was signed in 2000 and became another player who Arsene Wenger taught a new position to, moving him to right back. He became the type of full back Mr Wenger was trying to introduce, not just good defensively but great going forward.

The Cameroon international suffered a devastating knee injury in 2006 which he has since admitted he never truly recovered from.

Here are 10 things we learnt In Lockdown with Lauren on Arsenal.com ….

Arsenal Wenger Won Him Over
It’s becoming a theme with players explaining how Arsene Wenger’s ‘personal approach’ sold them to joining us. When Lauren went round to the house of David Dein to meet the manager he was also considering offers from Real Madrid and Roma. By the time dinner was over he agreed to move to London, impressed that at no point was football discussed but his hosts wanted to know about him the person.

New Position
Like Arsene Wenger taught Thierry Henry and Kolo Touré new positions, he didn’t see midfield as Lauren’s permanent position despite that being where he had played in Spain.
Lauren admits that at most other clubs he would have refused having to learn how to be a full back, but he accepted that he was joining Arsenal at a time when they had world class players on the right of midfield. Being right back allowed him to stay in the first team

Secret Life
Away from football Lauren is passionate about boxing. So much so that after training and, intensely in pre-season, he would go and spar with semi professionals. He kept it to himself at the time as you can imagine his manager might not have thought it was the best way to be keeping yourself safe between match days.

That Penalty
In 2002 on route to a Double we were being held 1-1 by Spurs with 10 minutes to go when Henry won us a penalty. The striker though had a superstition, he wouldn’t take spot kicks if he was the man fouled. Pires, normally the 2nd choice wasn’t on the pitch. So up stepped Lauren
He confirms in this podcast that this wasn’t prearranged by his manager but him taking initiative, pushing away the likes of Wiltord, Vieira and Kanu.
Cameroon had won the Olympics and Cup of Nations with Lauren scoring high pressured pens so he felt this was his moment. He proceeded to calmly roll the ball down the middle and would do the same a few years later at the Lane

3 Key Areas
Lauren didn’t name names, but it was obvious what he was saying when asked what have Arsenal lacked since his generation. He insists any man to play for Arsenal is talented or else they wouldn’t make that level, but then he talks about commitment and wanting to fight for the club. He points out that when we last won the title you could even trust those on the bench to fill in and fight for the club.

Players Would Fight
Apparently if the press were allowed access to training between 2000-2006, they would have got plenty of stories. Lauren admits to arguing and getting in scraps with his peers, but says it showed they cared about the shirt. Like brothers they could fight each other but no one else could.
Come match days everyone knew they had each other’s backs. He says he prefers that than a quiet dressing room where everyone is best friends. (Like the last decade you sense?)

Mentality
This is the word he used a lot in this podcast, and one that many gooners feel we have lacked for a decade. Lauren speaks only when retiring was it time to reflect on what he won.
His mindset was, win a trophy, have a party in the evening, but the next day was time to focus on your next goal. I have heard the likes of Tony Adams, Roy Keane, Gerrard, Lampard, Scholes, Giggs and Jon Terry think the same. What do they all have in common? …. They are winners.

If We Had Won The Champions League….
There’s always been the feeling that our Invincibles were split up too soon, mostly to pay off our stadium debt. Yet Lauren says the mindset of players would have been different had we held on that night in Paris.
He actually gets some names wrong. Vieira had left, Bergkamp was retiring, Pires and Campbell not offered new deals. So, when he says players would have stayed, it was only really Cole and Reyes that summer and Henry 12 months later who wanted to move. Would Cole and Henry had stayed? Maybe…

Lauren Could Have Recovered From Knee Injury
Lauren is very honest. He admits that if we had carried on being successful, he would have found the mentality to do what was needed to get back to his best. He admits that while he was injured there were lots of changes at the club. Many of his friends left and were replaced by younger players. Lauren says he lost his motivation, feeling the mood had changed at the club and it wasn’t the same dressing room.

He Knew He Was Finished
Portsmouth fans won’t want to hear this. As much as admitting he didn’t have the mentality to do what was needed in rehab to return at Arsenal as we were not successful, he equally didn’t have the motivation to play at a lesser level. He played 28 times at Pompey, but admits he was hiding that, in reality, he was finished and just wanted to move back to Spain. He was happy to take the pay check though…

Be Kind In Comments