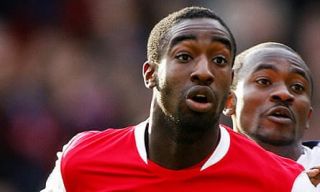 Ten Things We Learned In Lockdown With Johan Djourou

The perception of Arsenal between 2007-2014 is of a side with talented youngsters who lacked that mental strength when it truly mattered. At crucial moments in games and seasons we simply didn’t have that game management, to the point our opponents knew we were fragile.

So, when listening to the club’s websites latest ‘Lockdown’ episode I was pleasantly surprised to hear how much confidence and self-belief Johan Djourou had. He spent a decade in North London but was only 26 when a loan move to Germany was made permanent. I felt given the competition for centre-back at that time, he had the quality to force his way back into the first team.

Here are 10 Things We Learnt In Lockdown With Johan Djourou

He Says He Was Cocky
When asked how nervous he must have been to move to England at 16, joining a squad who had just gone a season unbeaten, Djourou explained he may have come across cocky as he had no doubts he would succeed.
He explains he had been so focused on achieving his dream he wasn’t going to let any negative thoughts stop his destiny. When he retires, he wants to help those with mental health problems to find confidence.
If only more of his teammates had that outlook.

Two Boys From Geneva
Moving to England at the age of 16, it was natural he would spend the majority of his social time with fellow countryman Senderos, who was two years older. Both came from the City of Geneva and were thrown into a new culture, language and the hustle and bustle of London life. The two were a crutch for one another on and off the pitch. They would go on to be in Switzerland’s defence at 3 World Cups and a European Championship (Johan played one more game then Senderos).

Star Struck
As a teenager he got into the habit of looking on in awe at what he saw in training, especially the touch and control of Bergkamp. He would at times stop and just watch, finding it surreal he was now working with stars he grew up watching. As he settled in, he was reminded that if he wanted to be in their company, he needed to not respect them, but to work as hard as possible to prove he belonged at their level.

Arsene’s Man Management
The defender gives an insight into how Wenger’s man management works. The coach wouldn’t just focus on the first team, but would also make sure youngsters were motivated and focused. In 1 on 1 meetings his boss would tell Djourou he was good enough to be playing, but part of his development was learning to be patient. After a MOTM performance, the very next week he was dropped for fit again Kolo Touré. Mr Wenger would point out that Kolo had earnt the right to walk back into the 11 based on his body of work. The Frenchmen said that’s football and it’s something else to learn. Was the gaffer just spinning more than 1 plate, knowing his first-choice centre backs but keeping Johan’s ego big because he needed him for the future?

Bad Injury
In 2009 the defender missed the whole season with a knee injury which only now he understands was more serious then he thought. It was the player who was ultra-positive to the point that Mr Wenger had to spell out this was career threatening. To put the issue into perspective, this was the same issue Ledley King had with his knee (although his was to both). King was never able to fully train again, play 2 games a week and retired at 32. Thankfully the Swiss’ recovery was more straightforward

Sebastian Squillachi
Now fit, Johan was a bit taken aback to see Arsene Wenger buy another defender. It was this moment where Johan realised he had to prove himself all over again to his manager, not his talent, but that his knee problem hadn’t made him a shadow of who he used to be. It inspired him to have his best season ever. He was polite how he said it on the podcast, but he knew he was better than Squillachi (Trust me Johan, so did all gooners!)

That Newcastle Game
In 2010 the defender would score his first League goal in his 100 games for the club. Unfortunately, the landmarks came in a 4-4 draw with us becoming the first in Premier League history to surrender a 4-0 lead. To be fair to Johan, 4-0 was the scoreline when he was subbed. The bench felt with the margin of lead we had, there was zero point him to further risking a niggling injury he was carrying. The player points out Diaby’s red card was harsh, the Toon got 2 questionable pens, and Tiote equalised with a volley 9 times out of 10 flies over the bar. He says it’s an example of how quickly momentum changes in the sport. For me, it’s an example how we had zero leaders

That Birmingham Game
Other guests on the Lockdown have admitted they felt if we had won the League Cup Final in 2011, our season wouldn’t have crumbled in the manner it did. Yet Johan goes one step further, saying the manner of the defeat hurt so much he could never recover what he felt was his best form that year. For a youngster to carry that over into the next campaign shows our lack of leaders. An Adams, Keown or Dixon wouldn’t have let that happen.

Van Persie The Leader
He’s tried to explain his side of the story but some gooners won’t say anything positive about Van Persie, given how he left the club. Yet he might have been a better captain then you assume. He wasn’t loud in the dressing room but led by experience. One night though he had a heart to heart with Johan which clearly means allot to him. Our striker had just seen Barcelona knock us out and got one of the harshest red cards in Champions League history. Yet he still took the time to tell his defender he was performing at the highest level, had impressed everyone with those standards and just now believe you belong at the top level of the game.

His Choice To Leave
In 2013 Djourou had gone back to mostly featuring in cup ties. When he did start in the League it was as a makeshift right back. He asked Arsene Wenger to let him leave as at the age of 26, he wanted to be playing every week. His manager insisted he believed he had the capabilities of breaking up the BFG/Koscielny partnership but allowed the player to make his own choice. He was loaned to first Hannover then Hamburger SV, which would be made permanent.

Djourou came to North London a teenager and left as a man, he grew up with us which is why he calls Arsenal, ‘home’. He played in the red and white 140 times, but chose to leave at the age of 26 when the signing of BFG saw him lose his place in the starting line-up. 2 League Cup Finals was the closest he came to a medal, but I still feel if he were patient, he would have been around for our later success in the FA Cup.

He was just as good as those who have been at centre back since. Even if you think a Gabriel, Mustafi, Holding, Chambers, etc, were better, it’s not clear cut. Heck we even got to the point of asking Monreal to learn the role.